Empowering the Future of Clean Energy

Solaris Energy is a commercial scale solar project finance and development firm. They are responsible for providing business and communities with clean energy that can offset CO2 emissions. They can achieve this while providing a cheaper cost than regular electric companies for businesses. They help solve many of the UN SDGs but mainly the "affordable and clean energy" and "climate action" are the top ones they have a major impact on.

Solaris Energy was created by Alex Blackmer around the year 2011. Alex Blackmer was in the home building business, but mainly he was building off grid homes. Alex himself lived in an off-grid home while he was still building these houses for others. Alex soon realized the opportunity solar energy could provide for business entities and how it could be a valuable asset to businesses and the environment. He then put together a small group of investors and thus began the start of Solaris Energy. This company started as a solar financing group for non-profit organizations that give back to the community. The first projects were small rescue missions of low income housing that gave them the groundwork for their eventual uprise. They now have expanded to more than just a financing group and also expanded to cover more types of entities than just businesses. With their beginning staff only being consisted of interns and volunteers, the effectiveness has only increased since the beginning days. With a true staff of around 10 people, they now have over 85 operational projects across 8 states in the U.S.

Solaris Energy provides the equipment for the solar job and begins to execute any project that comes their way. They claim to offset around 14,792 tons of CO2 emissions a year which is an extraordinary milestone for any solar company. With projects ranging from places like Colorado State university to First United Methodist Church in New Jersey, Solaris Energy provides enough reasons to certify themselves as a contributor to impacting not only the environment, but also the community.

Meet the SolarisEnergy Team who are changing the world

The inspiration began back when Alex Blackmer was building off-grid homes on a local scale. He saw the potential in providing a community with a renewable energy source while also benefiting the environment while doing it. The intentions were clear, the mindset he had for this journey would involve the mission to benefit the planet as well as the people on it. This would begin him to create a journey for himself that would eventually lead to the creation of Solaris Energy. Although I was not able to interview Alex Blackmer myself, I did manage to interview his friend and co-owner of Solaris Energy Nick Perugini. His story with the involvement of the company began when he was introduced to Alex Blackmer. He was working with another firm at the time and Alex was in the early stages of Solaris Energy and was actually funding the project Nick was working on. Once he saw what he was doing, he immediately built a respect for him and thus rose an interest in his work. Fast forward a couple years and Nick was now working as a private consultant for Solaris Energy and it was favorite to work with at the time. Eventually Alex would hire Nick on the payroll and this would begin Nicks journey to becoming a co-owner of a company he embraces whole-heartedly. Nick ended his story by saying, "I am now a partner with someone I like to work with, at a company that I love, doing what I think the world needs to do and what I love to do". This just shows the passion that someone can for our world and society, hopefully Nick brings some inspiration to you and your career as he did to me.

When you think about the overall impact Solaris Energy has, you can start with the recent boom in their business success. When sitting down and talking to Nick Perugini, he mentioned that there has been a significant rise in clean energy over the last 4 years. This has propelled their growth and also helped the overall impact they can provide. The long-term goal at Solaris Energy is to continue to do exactly what they are doing, keep making an impact on the world. They want to not only continue to make an impact on the environment, but also play an important role in taking care of every employee and costumer they encounter. If that happens, then it will be easy to give power or groundwork to others allowing for them to take care of themselves. This will hopefully create a chain reaction for others, making it simple to follow in the footsteps of Solaris Energy. In the short term, Solaris Energy is committed to providing solar energy in the form of their projects to a majority of groups. Although they do not operate on residential or huge utility solar projects, they still are involved in a variety of business to serve. As Nick said they have grown about a 3rd in a little over 18 months, the growth of Solaris Energy suggest that the impact they are having on people around the country is being heard. Hopefully this can continue to happen and they can provide even more projects a year. Right now they aim to accomplish around 20 projects a year and if they continue to gain traction that number can see improvement.

Since Solaris Energy has been around with the mindset to help others and create a positive impact. With the B-corp movement and certification, this only put their values of the company onto paper. The company has been able to increase revenue, increase employee retention, promote new markets, create new investment opportunities, and lastly, been able to promote employee wellbeing. They have managed to do all of these things through the ideas of a benefit corporation as well as the ideas from their founder Alex Blackmer. Solaris Energy is known to be one of the first solar companies to finance solar projects for non-profit and unrated entities. This type of innovation created a new market opportunity for their company and others aspiring to do the same work. Regionally, Solaris Energy likes to look at new markets that are upcoming or markets that can be innovative to the country. These ideas are more focused on the external part of Solaris Energy. On the other hand, the internal side of Solaris Energy proves to be groundbreaking in some aspects for other companies. They make sure and pay their employees well and give them the benefits they deserve which overall translates to very high employee retention. The opportunities the company has provided have not only been external, but the chances it creates for their employees is another high value area. With many of the employees not necessarily having experience in the solar energy field, Solaris Energy needed those employees for their skills which ultimately gave them an opportunity for their eyes to be open to a whole new type of business.

Solaris Energy does more than just provide an affordable and cheaper long term energy solution for businesses. The company is focused on creating an impact, whether that impact be in the community or environment. Local environmental impacts by Solaris Energy have already been seen by the community around them and Solaris Energy is continuing to make a difference. The impact Solaris Energy makes is noticed and has picked up traction around the Fort Collins area as well as across the U.S. This company specifically tackles the "affordable and clean energy" UN SDG with ease, but that's not the only goal it handles. With Nick Perugini, he believes his company is tackling almost all the goals in one way or another. He believes that the the company is in one way or another touching all the goals that are stated.

To explain this more, with Solaris Energy, they are providing clean energy that can translate to protecting "life on land" which can also translate to benefiting "life below water". Do you see the trickle effect that Nick Perugini is mentioning? With this company, they are doing more than tackling one goal. This is something the B-corp family envisions as an eventual outcome for any business that wants to certify themselves as a benefit corporation. Not only will they benefit to a specific UNG SD, but they can have an impact on all of them in some type of way, whether it be directly or indirectly. As a company Solaris Energy is benefiting society by managing to tackle goals like "good health and well-being" for their employees as well as "quality education". The overall family feel to their company has been able to create a friendly and motivating place to work every single day. 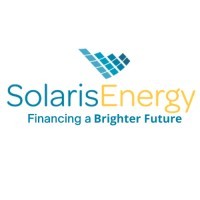 Solaris Energy provides clean and renewable energy for businesses, schools, and non-profit organizations. They strive to give a cost-effective solar energy source for others to take advantage of. With their dream now being accomplished of providing energy to commercial and industrial companies thanks to investors. The investors themselves can also benefit from the return they receive from Solaris Energy providing a low fixed cost for businesses to focus more on the services they want to offer.