Indonesia is the world's second-largest contributor to plastic waste in the ocean. Seventy percent of the plastic waste comes from single-use food and beverage plastic containers. Evoware makes a food packaging plastic replacement which is preservative-free and made from chemical-free farmed seaweed. People can eat the food packaging and take advantage of its nutritious seaweed which contains high fiber, vitamins and minerals. Evoware’s products are free from pork, alcohol and certain other ingredients which make them Halal certified and fit for Muslims to eat. This is important since Evoware was launched in Indonesia where the majority of the population is Muslim.

The products are made without gelatin that is normally obtained from cows or pigs and do not contain any animal derivatives, so they are also suitable for vegetarians. In addition, the products can be used as natural fertilizer for plants and are biodegradable in 30 days after being thrown away. Since the products come from seaweed, there is no land used for cultivation and deforestation which often occurs when land-based plants are chosen to provide the materials. Since most of the oxygen on earth comes from the ocean, planting more seaweed will improve air quality because seaweed is absorbing carbon dioxide and releasing oxygen.

The first product from Evoware is edible glass called Ello Jello cups. These cups are made colorful with several flavors such as peppermint, orange, lychee and green tea. The second products are food wraps and edible sachets. They can be eaten and are odorless, tasteless and biodegradable as well. The packaging can be used for food products such as single serving instant coffee powder, cereal and instant noodle seasoning which can be easily dissolved in hot water. People can just pour hot water to the seasoning sachet in a bowl of noodles and stir it without opening the sachet first. The packaging can be used for burger wrapping and there is no need to remove the packaging first before eating the burger. In addition, the packaging can be used for non-food containing products such as soap bars, straws, toothpicks and sanitary napkins. 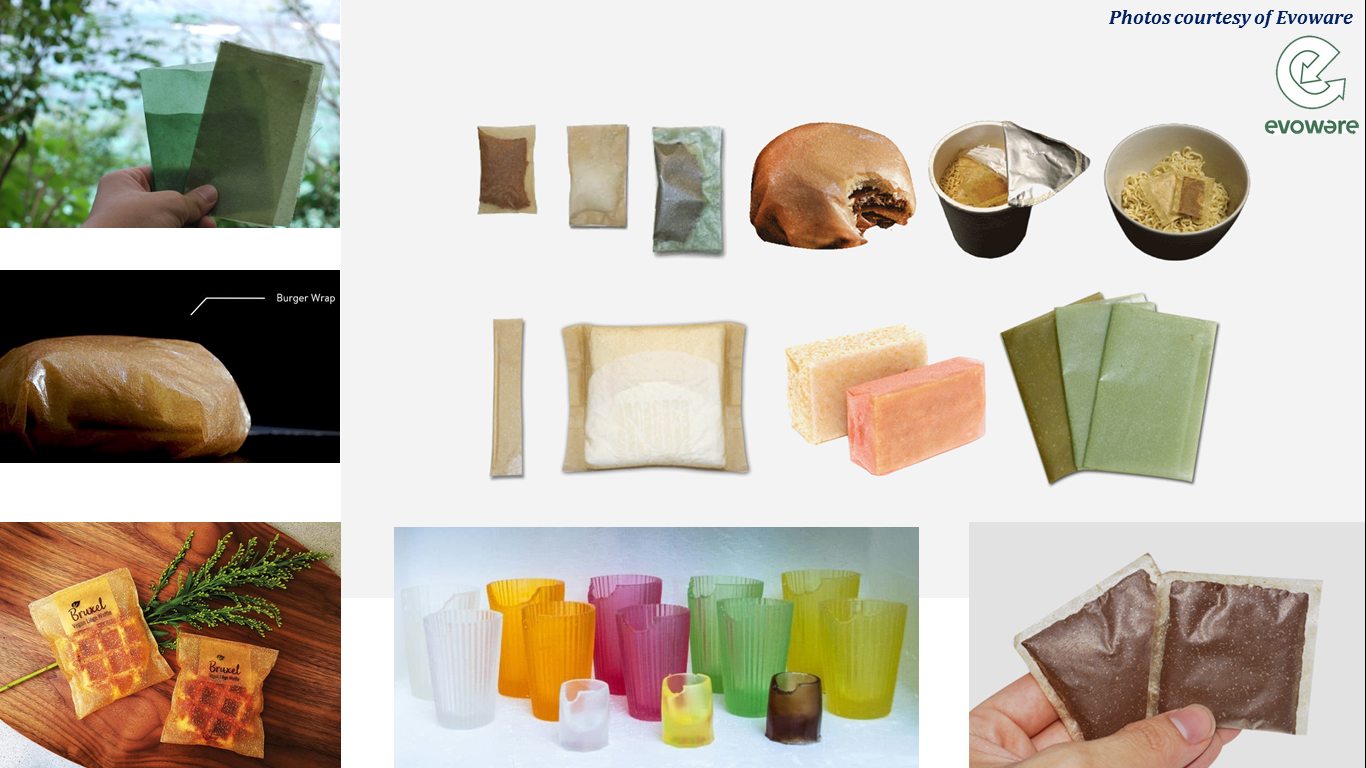 The first idea for Evoware came from founder David Christian's childhood experience when he woke up late for school and to save time, had instant noodles for breakfast. He thinks that noodles can be prepared more quickly when there are no small sachets to be opened.

The second idea came from the fact that Jakarta, his hometown, often suffers from flooding due to plastic waste clogging up the water system.

The third idea came in 2015, when Christian returned to his hometown in Jakarta after finishing four years of study in Vancouver, Canada. He got used to the clean and fresh environment there and found the air quality in Jakarta far worse.

"As soon as I get off the plane, it literally hits me that because of the pollution, I couldn't breathe. In the streets and in the rivers, I also saw a lot of garbage, especially plastic garbage," he said. "Then I did a little research about the plastic and found out that plastic is contaminating everything from the air, the land, the water including our drinkable water and even our food is already contaminated by plastic. One study said that 76% of the water and more than 25% of the seafood in Jakarta are contaminated by micro plastic."

He added that "We want to replace plastics, especially single-use plastic packaging and increase the livelihood of the seaweed farmers in Indonesia."

Seaweed-based packaging as a replacement for plastic will ease the waste management process because it is biodegradable and it will ensure that the packaging waste can return to the earth naturally. The reduction of plastic usage is going to reduce gas emissions too since production of plastic uses toxins and chemical materials which release carbon dioxide into the air and heavily contributes to air pollution. No more plastic waste also means no more plastic ends up in the ocean and it will help maintain seashore cleanliness. This innovation will help reduce plastic contamination to the water, the land and to the air. This innovation also aims to help poor seaweed farmers in Indonesia by buying directly from farmers’ cooperatives thus increasing the farmers’ income which adds to their prosperity and well-being.

Several food retailers in Indonesia have ordered Evoware’s seaweed-based packaging. One of them in Jakarta is food and beverage retailer Ong Tek Tjan who sells ice cream in Evoware’s Ello Jello edible cups which his customer can eat afterwards. In addition, Evoware has already sent samples of the edible packaging to approximately 100 companies worldwide as part of their promotional campaign so they can directly test the seaweed packaging with their products. These companies can proceed with pre-ordering the products once they are satisfied with the packaging.

The innovation of seaweed-based packaging which can be eaten and dissolved led to several awards received by Evoware. It was one of the six winners of New Plastics Economy’s $1 million Circular Design Challenge 2017, a contest run by the Ellen MacArthur Foundation and OpenIdeo that focused on finding solutions for plastic packaging items that are too small or complex to normally get recycled such as seasoning sachets, wrappers, and coffee cup lids. Evoware also successfully brought Indonesia for the first time as the winner of Idea Category in Social Venture Challenge Asia 2017, the competition organized jointly by NUS enterprise, the entrepreneurial arm of the National University of Singapore (NUS) and DBS Foundation. The innovation helped Evoware gain international recognition and exposure including being featured in the October 2017 issue of the American magazine “Fast Company” which focused on innovation in technology, leadership and design.

Christian realized that Indonesian people don’t care about the environment. It is too boring for them to listen to reasons for change. As a result, he launched the first product of Evoware which is edible cups. The product is intended to educate people, especially children, in school. The edible cups are used at school parties so it can be more fun because the children can drink from, and eat, the cups while simultaneously educating people and increasing their awareness about the healthy environment. The impact is expected to be the long term benefit when the children are grown and realize the importance of protecting the earth from plastic waste.

The seaweed packaging as a replacement for plastic packages is going to impact the cleanliness of the sea because no more plastic waste will end up in the ocean and it will protect life below water since no more fish, plankton or any marine living creatures will eat the micro plastic. Also, it will significantly reduce the garbage in landfills and will improve air quality because every kilogram of plastic production creates 6 kilogram of carbon dioxide which contributes heavily to air pollution. Moreover, reducing plastic waste will help reduce flooding in Jakarta. Currently, plastic waste clogs up the water system and causes massive flooding in most of the Jakarta area during the heavy rain season.

The source of the Evoware seaweed packaging and the edible cups are coming from seaweed farmers in Makassar. According to Christian, Indonesia is the world's biggest seaweed producing country. However, there is a large amount of seaweed production which results in poverty among most of the seaweed farmers due to how it is marketed and the use of many middlemen. Evoware buys the seaweed directly from seaweed farmers’ cooperatives in Makassar, so it bypasses the long marketing chain and the middlemen, and farmers can get a better, fair price for their seaweed. 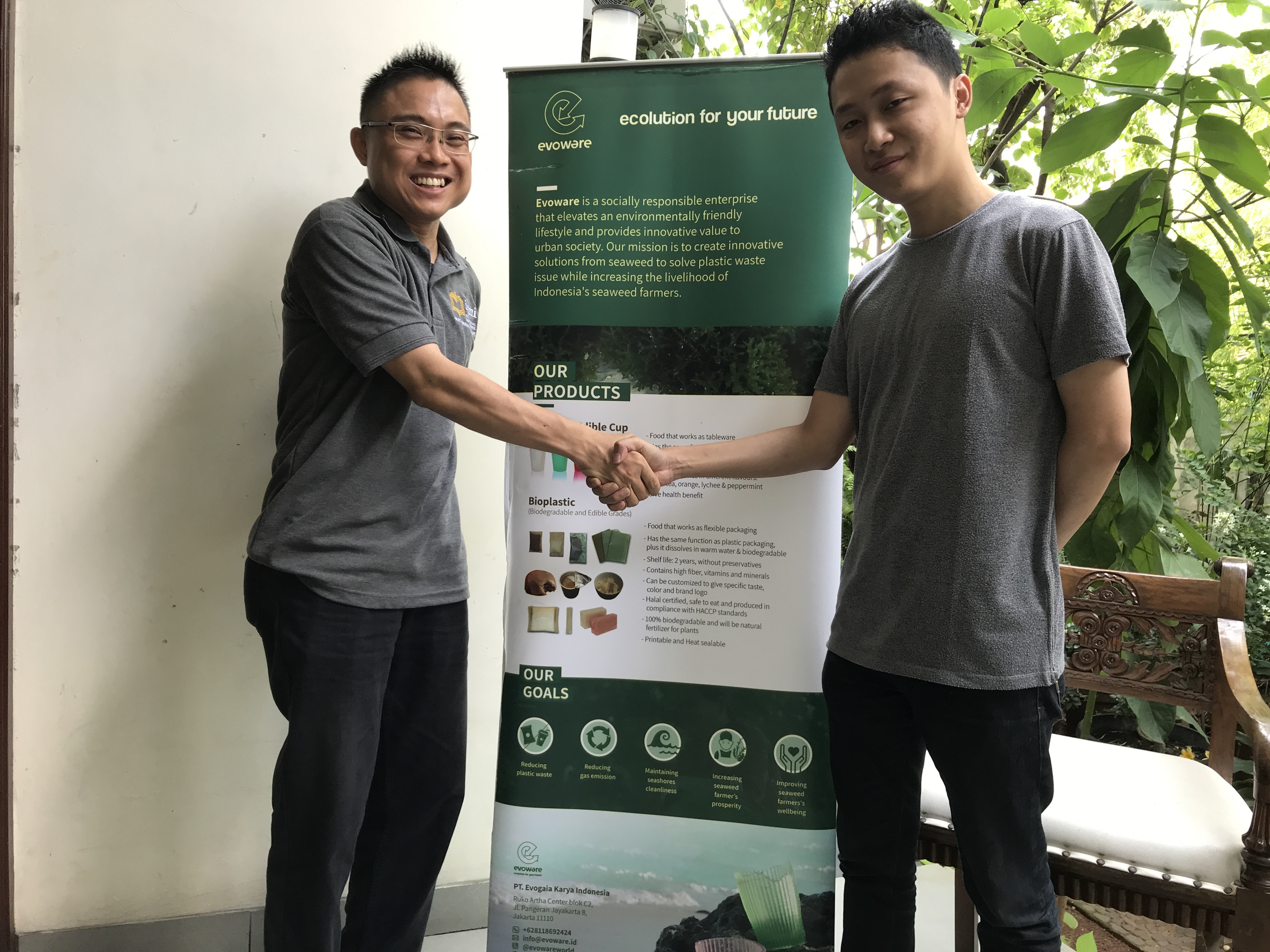 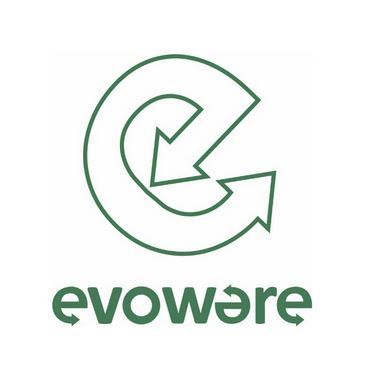 PT. Evogaia Karya Indonesia or Evoware is an Indonesian company that offers environmental solutions for plastic waste problems by creating and designing packaging made from seaweed that can be dissolved and eaten. Evoware is also a socially responsible enterprise which elevates an environmentally friendly lifestyle, encouraging people to be closer to nature and live a more responsible and sustainable life. This also helps seaweed farmers by increasing their income and improving their well-being.