Early Morning Harvest works to incorporate sustainable closed-loop circular initiatives into its farming practices. The company uses many different processes to ensure that almost everything has a purpose that can be used in the manufacturing process. One example is the aquaponics system that is a sustainable cycle that creates a symbiotic relationship between plants and fish. The purpose of the aquaponics system is to support the company's goals of growing produce without harmful chemicals or pesticides and to support all organic produce by purchasing a majority of organic non-GMO seeds. This also allows for a reduction of labor for the farmers that work at Early Morning Harvest.

Early Morning harvest also includes free-range chickens, fresh tilapia, grass-fed cows, and a grain mill to produce flour and cornmeal. The company uses rye, and buckwheat as cover crops to help prevent erosion and increase soil fertility. The workers use these same cover crops to make flour for baking products to be sold to the locals within the community.

Early Morning Harvest specializes in growing through aquaponics. Aquaponics can be seen as a closed sustainable circle that connects the growth cycle of fish and plants. The fish provide nutrients for the plants and the plants help clean the water for the fish. This process offers many benefits in sustainable farming because a traditional farm would otherwise use more water and nutrients. The fish used in this system are White Tilapia. Tilapia are also sold at Early Morning Harvest, providing fresh fish for the community as well as fresh produce. While the process of aquaponics helps Early Morning Harvest operate sustainably, the company is also working to reduce waste by using leftover crops to feed the animals on the farm and creating fertilizer from the manure to add nutrients to the plants.

Early Morning Harvest supports Sustainable Development Goal (SDG) 3: Good Health and Well-Being and SDG 12: Responsible Consumption and Production. The aquaponics system allows for a closed circle sustainable system that allows nutrients to reach the plants without the use of harmful pesticides. Initiatives like this promote good health and well being. There are many other processes at the company that promote responsible consumption and production, such as free-range chicken, the incorporation of cover crops, and the no-waste initiatives. 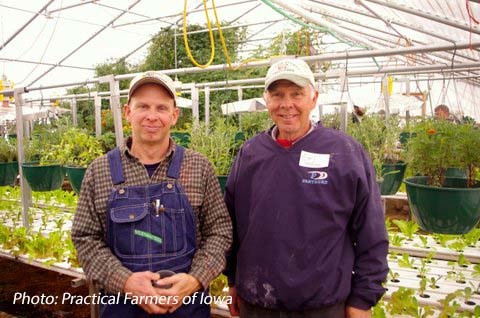 Jeff Hefner, the owner of Early Morning Harvest, has had years of experience farming with his father, Earl, since 1993. In 2000, Jeff and Earl transitioned the farm to organic. Later, Jeff went a step further and added aquaponics to the farm, inspired by his deskmate in the military who had a great understanding of the benefits of aquaponics. Jeff was first attracted to this idea as he had found that the implementation would help to eliminate the need to pull weeds from the crops. This innovation would allow for less labor due to the production system of aquaponics.

Not only did this innovation reduce labor, but it also supported the core values of Early Morning Harvest which are dedicated to fresh, healthy, and local produce. This even went a step further and became a system that is sustainable and is a stepping stone in the right direction for the sustainable farming industry. Jeff and his associates put healthy produce at the core of all of the items that they sell on the farm. This can be seen in the way they raise and feed the animals, the aquaponic system in which they grow the produce, and the growth and production of the grain mill.

The organic and aquaponics food has been impactful in the community gaining many customers for sheer interest in the aquaponics farm. Not only has Early Morning Harvest provided organic local fresh produce in the community, but it has also defined the company as an inspiration for the future of sustainable agriculture. There are many short- and long-term effects of this innovation. Short-term effects can be seen in the wellbeing of the community and employees and in the health of the environment. The company is also working to create long-term effects by becoming a sustainable farm that can lead as an example for many other farmers. The environmental effect of these innovations is a reduction of pesticides and associated runoff that can end up polluting our waterways. Finally, the implementation of cover crops provides nutrients to the soil in a natural way which is a sustainable way to prevent nutrient depletion of the land.

Many people are drawn to Early Morning Harvest because of the responsible and transparent practices of the farm. This has a large impact on the surrounding community. Early Morning Harvest's farm products can be found locally at Campbell's Nutrition, Greatest Grains, and throughout various Hy-Vee's in the state of Iowa.

There are many business benefits to aquaponics farming. Though the costs of starting an aquaponics farming company may seem large, it comes with great benefits in the long run. The aquaponics culture and zero-waste mentality help the company incorporate items into the system that would otherwise be wasted. Integrating this waste back into the system for growth allows for cost-savings, also. The business has allowed for many positive changes to occur within the growth of the company. Not only has the company provided a sustainable service and product, but it has also provided the community with food that is local and promotes healthy wellbeing.

This can also be seen in the way that Early Morning Harvest runs its business. It is a family business that takes pride in the success of its work and the health of its employees. Similar to the way the company takes care of the health of the community, it also takes care of the employees. The aquaponics system creates a sustainable system that contributes to the health of the environment. The aquaponics system also reduces the labor of staff because it allows the employees to farm without the tiring labor of pulling weeds. This is extremely beneficial for farmworkers because it reduces the time and work of labor.

In a rural and primarily farming state, Early Morning Harvest's farming approach is a huge transition and has garnered interest for these reasons. The environmental benefits of this company speak for itself through reduced inputs, healthier soil, reduced energy usage, no synthetic chemicals, and the utilization of waste. Early Morning Harvest also does its part to get involved in the community, such as contributing donations through sales of products at farmers' markets and by supporting Iowa food coops. The company has also been present in the community through its online presence. Early Morning Harvest has a page on its website dedicated to recipes that the community can access. These recipes include things that can be made with grains and produce from the farm such as different styles of polenta, pancakes, and cornbread. Early Morning Harvest stands as a local organic and sustainable company that serves as a role model for the future farming industry. 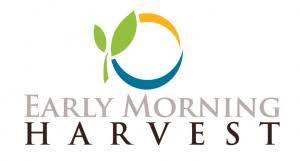 Early Morning Harvest holds high values to create fresh healthy produce and seeks quality in every aspect of the farm. The company raises grass-fed beef that is organic and feeds its chickens all-natural ingredients. Early Morning Harvest produces its own honey with locally sourced honey bees and uses wheat, rye, and buckwheat as crop cover and then produced into baking flour. All of the care that goes into each production item makes Early Morning Harvest an exemplary farm that possesses many sustainable qualities.