Drink Your Way into a Heathy Life

Prokey is an innovative health product that has arrived to replace traditional drinks. It is linked with the third UN Global Goal, Good Health and Well-Being, as it is a drink made with kefir and kombucha. It also contains probiotic components that benefit our bodies in various ways, since they contain live microorganisms that produce positive functions once ingested. They ease digestion, improve our immune system, enrich our gut flora.… So, you obtain the same benefits you would from having a yogurt with bifidus just by drinking a delicious, low-calorie drink. Moreover, it is becoming increasingly popular among athletes since it reduces injuries, fatigue, and so on.

This innovative product is directly linked to the third UN Global Goal, "Good Health and Well-Being," as it positively collaborates towards its development.

The innovation is creating a water-based kefir instead of the milk-based kefir that is already in the market. Instead of using dairy, now only kefir, water, and sugar are needed. The latter is consumed by the kefir bacteria, enabling you to have a drink full of beneficial bacteria and very small amount of sugar.

What differentiates water kefir from milk kefir is that milk kefir consumption includes the consumption of the proteins and fats of milk, so the body needs to digest and assimilate them first. But when consuming water kefir, as it just consists of water and bacteria, you are directly consuming the bacteria, thus skipping those previous steps. That is, milk kefir would be a beneficial nourishment, but if you are just looking for the probiotics, water kefir is the most accurate option.

Thus, it is thanks to the introduction in the market of this product that a new source of nutritious drink is available to citizens. People can now opt to include this healthy and beneficial beverage in their diet. Moreover, it is not only healthy but also tasty, therefore being the perfect substitute for other not-so-healthy drinks such as all those sugary drinks like cola that dietitians usually advise people to cut back on.

In this case the innovation consists of creating a short-lived craft product in the market and being able to make it shelf-stable while maintaining all its nutrients. Not only does it last for a year packaged, but also it does not need to be kept cold. “The product already existed, I have not invented anything; the only thing I have done has been to obtain a stability and develop an industrial process, which didn’t exist before.” 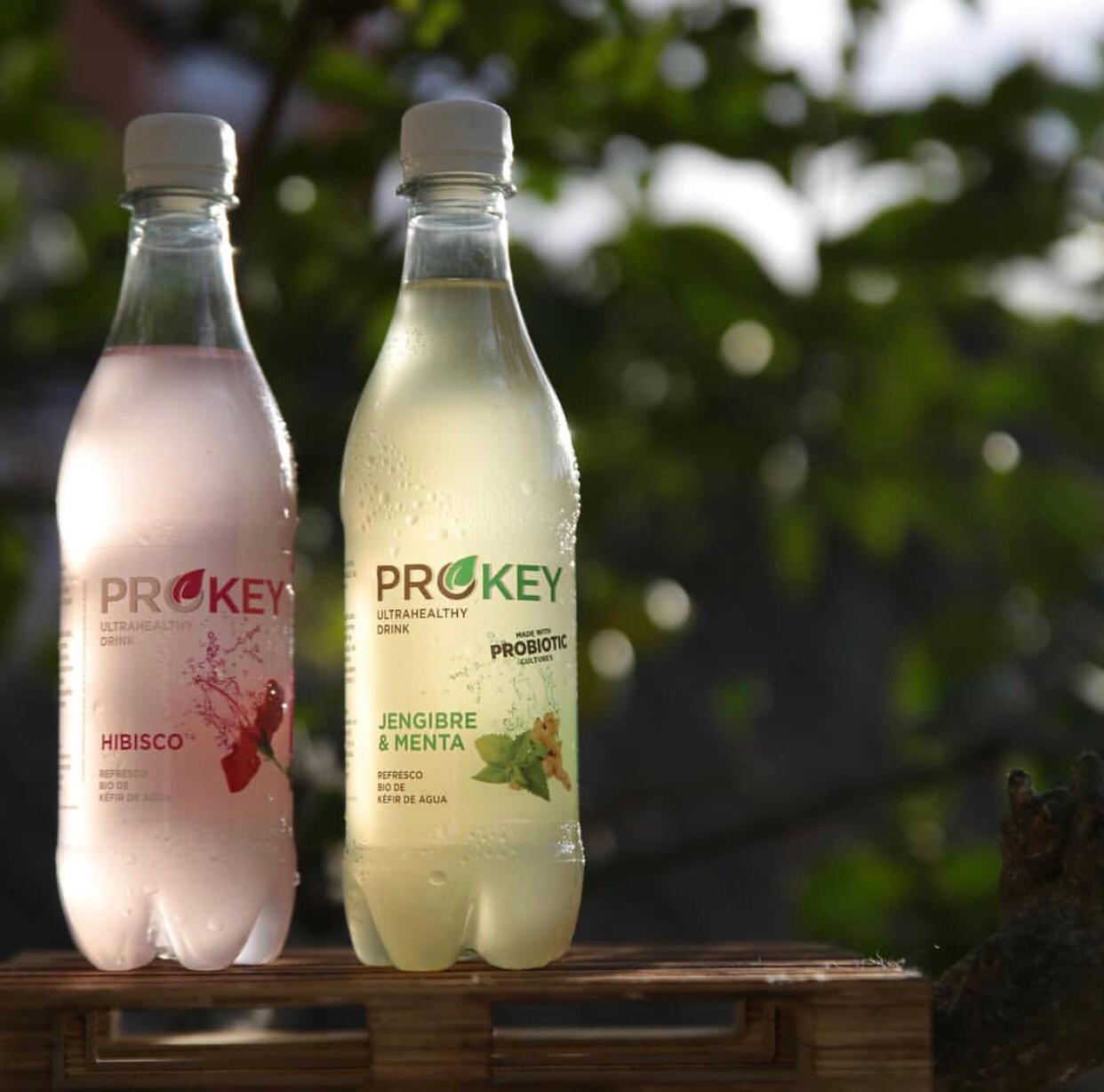 Albert Hurtado, a lover of triathlon and Crossfit, decided to listen to his friends' advice and set up his own company. He initially started to produce kefir water in his kitchen. His friends provided him with a Petri dish of kefir in order to create this drink, which consists of a mix of an isotonic and a probiotic nourishment, being able to have both in just one drink without losing any of their nutritional benefits. At the beginning, the drink was just for self-use, but soon his family and friends were demanding the water. As the interviewee stated, "I started making a liter and, all of a sudden, I was preparing packs of 10, 15 liters." As soon as he decided to stop being a university nutrition teacher, he took up his new project, Prokey Drink.

It took him a year to create a probiotic drink that lasted 1 year, as normally a drink of this kind would only last 4–5 days. His first sale came 1 year after the creation of Prokey Drink. Since then, Prokey has expanded its horizons widely, and there is still more to come. His main aim is to create a healthy soda in order to change the bad nutrition of the population, and instead of drinking an unhealthy soda substitute it with a Prokey drink, which has a different range of good-tasting flavors.

Prokey drinks have had their impact on business, society, and the environment. This impact is quite remarkable.

In terms of business impact, the firm has kept up with the market flows during its 4 years of life by compensating its initial endowment. For instance, Albert tries to reduce any kind of expense by promoting manufacture in the place where the drink will be sold. This means the firm does not pay for additional transport costs, since they send materials needed to the corresponding place so that the product is manufactured there.

In the area of social impact, Prokey's best weapon is that its product makes people healthier, which, at the same time, results in society's general well-being. This can be considered one of the main objectives of the firm.

When it comes to environmental issues, the impact can be identified with the fact that manufacture does not involve much pollution and not much use of machinery.… In fact, even though they are still working on it, they try to use as many reusable materials as possible during the process of production.

As all firms do, Prokey has overcome both short- and long-term effects. Regarding short-term effects, Albert claims their major achievement has been obtaining a drink that would not only be sold for its beneficial properties but also for its pleasant flavor. The truth is, it has been very difficult for them to make it taste as good as they wanted due to kefir's acidity, which made it hard to sweeten the drink and consequently make it likable for all kinds of people and tastes. Therefore, the first 4 years can be seen as development years. Once they have reached this point, long-term effects have been easier to overcome since society seems to enjoy the product and clients are constantly increasing. Their main objective is to always maintain the mentioned beneficial features together with the expansion of the innovation around the globe itself, having North America as the main target.

After 4 years of developing and planning, Prokey is now starting to really get known and demanded. It started as a small project between Albert and his associate, Medir Vilà, and they sold their first official drink 1 year after they created the company. They now have a small office, where the four members of the company work and have their meetings, and there are two factories where the product is made. The factories do not actually belong to Prokey; instead, these two manufacturers produce the good for them.

Given that it is an enterprising project, Prokey is looking for ways of expanding the business, since their aim is to make it reach as many people as possible, helping them live a healthier life. One of the best ways to do this is to have well-known people advertise it. And since the product is very beneficial to professional athletes (it reduces fatigue and injuries), many high-level soccer players are consuming it, players such as Ibai Gomez or Marcos Llorente, who plays for Real Madrid. This has lead to fans getting to know the product. So, the brand is becoming increasingly popular, and we can see this just by looking at its instagram account: Prokey actually has 6,000 followers, which is nearly as much as brands like Font Vella.

For now, Prokey is only sold through the Internet and in specific stores, such as herbal shops, but only in Spanish territory. However, it will soon be sold in common supermarkets as well, which will undoubtedly expand the business and increase revenues. Their aim is to sell the product in supermarkets at a reduced price, so as to be affordable.

Furthermore, when it comes to the necessary transportation of the drinks, a huge financial layout is not needed, as they have opted for using union headquarters in different places and just sending the bacterial culture there, instead of sending the actual bottles of the drink. This way they will make the drink there at a very low investment, as the production process is very easy.

Albert's innovative firm is very concerned about its impact both in society and the environment. Prokey drinks' main benefits having to do with social issues could be summarized into three points: the drinks are healthy, they improve people's lives, and they are also available to those who cannot consume dairy, which is a highlight because it is an easier way for them to consume probiotics. What he really emphasized is the fact that Prokey contributes to people's health and that they consequently feel better and happier. This can be considered an indirect social impact, since as people feel healthier, they feel better. Apart from this, Prokey also has this social responsibility that is reflected on their sustainable way of dealing with manufacture and waste. What is more, 1% of Prokey's benefits are directly sent to NGOs or used for social reasons.

In areas of environmental benefit, Albert said, “Everything we do is completely involved in trying to improve these factors.” In fact, they try really hard to reduce their waste impact. Moreover, he explained that their manufacturing process is quite simple: “ We do not require high temperatures or very complex machinery.” What is more, he is aware of the low carbon footprint they have, much lower than other related factories. He told us that apart from their own environmental awareness, it is also a factor clients demand. Society is somehow always looking for alternatives to find that one product that can benefit the environment the most. However, Albert claims they are still working on this issue and are willing to get better at it.

Moreover, the transportation method that they use is not only financially beneficial but also environmentally friendly, given that less transportation is needed, as the Petri dishes take up much less space than the already packaged bottles would.

Prokey is an innovative health product that has arrived to replace traditional drinks. Created in 2015 by an expert on biochemistry, nutrition, and dietetics and an industrial engineer with an MBA, Prokey is a probiotic drink that is made with water kefir and kombucha.