In the early 2000's of India, the trekking industry was very fragmented and unorganized. This is where Arjun Majumdar saw an opportunity. Over the years, the idea has been built into a successful company. Considering how fragile the environment is in the Indian Himalayas, sustainability is a key part of their business strategy. Through the eco bag under the green trails initiative, Indiahikes involved the stakeholders in ensuring that the Himalayas are left cleaner than when they were found. This ensures sustainable tourism under the SDG 12 among others.

"Necessity is the mother of invention." As the trekking industry in India started maturing, Indiahikes noticed that the people who had done these treks had littered the trails and had done so without any concern for the area. For the first few times, trek leaders and other members of the team picked as much trash as they could. They soon realized thought that it is not possible to clean it all by themselves since other groups and individuals do these treks too. This is when they came up with the idea of an eco bag.

Some of the biggest problems on earth have the simplest of solutions. Indiahikes came up with one of these simple solutions. As a company that organizes treks for people, they involved all their stakeholders in the initiative. The concept was that each individual would wear a completely non-intrusive, reusable bag around their waist and would collect garbage found along the trail. Each evening, when the trekkers reached the next campsite, the trash would be collected and segregated. This would be repeated throughout the journey and the collected trash would be discarded in the right manner once a city is reached.

In a fragile environment such as the Indian Himalayas, sustainable tourism was the need of the hour. By starting this initiative, Indiahikes solved the problem of trash in the Himalayas while engaging stakeholders who were made aware of the issues as well thereby achieving UN SDG 12. 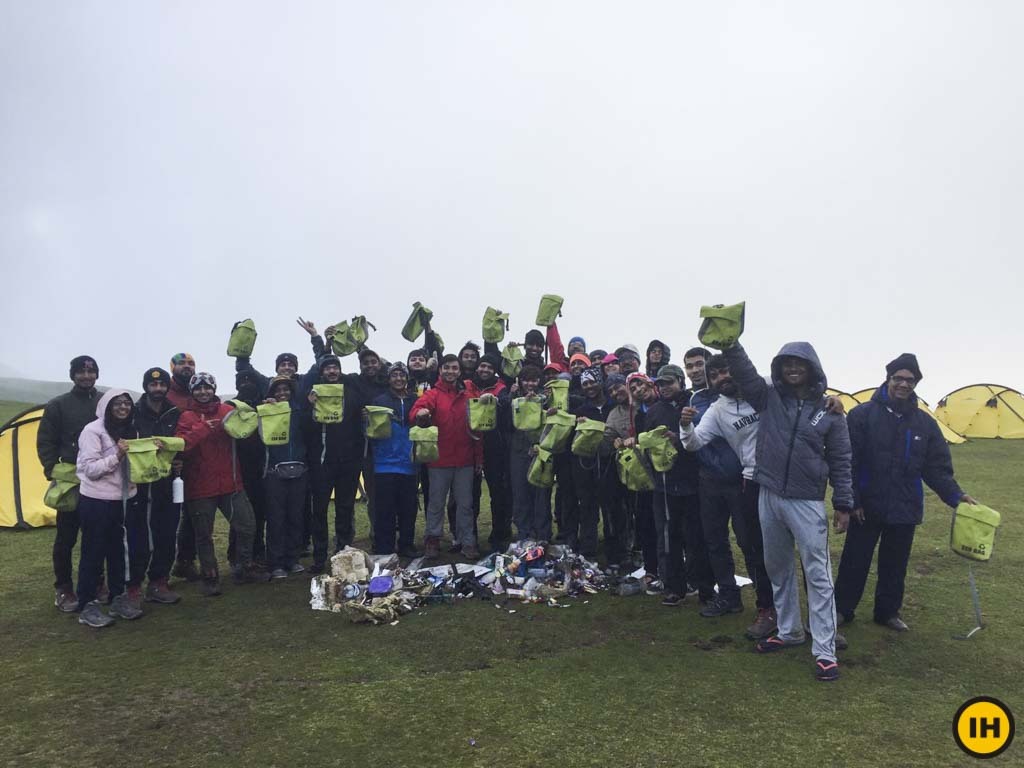 Eco bags in use! Source : https://indiahikes.com/how-far-would-you-go-to-clean-the-hills/

The presence of a lot of trash and proper management of the trash that is generated during a trek are the factors that inspired the company to take up this initiative. "If not us, who?" was the driving force. With the number of trekkers growing significantly in the country, somebody had to start this initiative otherwise it would have killed the industry not only for Indiahikes but their competitors, the trekking enthusiasts, and for the locals that depended on this ecosystem for their survival. They engaged the local governments to support the initiative as well.

The short term impacts were as follows:

The long term impacts were as follows:

In addition to impacting the people, they have been able to clear 100,000 kilograms of trash from the Himalayas. This action has forced other companies to follow suit. Ironically, the organization also promotes alpine-style trekking. For them and other groups who want to take up this initiative, Indiahikes also makes this reusable bag available for a meager ₹190 (close to 3 CAD). Since Indiahikes opens the treks to children and families, the company is able to help embed the values of sustainability into individuals from a very young age.

Indiahikes measures the impact of their treks on four quadrants - Waste footprint, water footprint, land footprint, and energy footprint. These make sense outside of the company as well. They have undertaken initiatives to reduce the impact across all four quadrants through minimalism and essential use. They have also addressed taboo issues like human waste and its disposal by using natural ways such as coco peat and sawdust to create manure for the flora that grows in the ecosystem. They have also reduced the food waste made along the trek by feeding the remaining vegetable waste to the mules that are also on the trek. This is a simple execution of circular economy. They have engaged the local and state governments to be part of the initiatives.

Through these initiatives, they have educated and assisted the local trekking organizations on the benefits of sustainable trekking. In fact, Indiahikes feels very proud when another organization follows suit or begins similar initiatives. Indiaahikes is always on the lookout to learn from others' initiatives as well. More details on the eco bag and other initiatives can be found on Eco bags - Impact.

Bangalore, Uttarakhand and Himachal Pradesh, IN

What started as a knowledge hub for trekkers in the nascent stages of mountain trekking in India, Indiahikes has grown to be the largest and most reliable trekking organization in India. Sustainability has been one of the driving forces of the company as the company has catered to nearly 20,000 trekkers in multiple treks of varying difficulties. Their initiatives are a testament to their belief - Everyone must trek!