Cupanion: The Water Bottle That Keeps On Giving

Cupanion launched in 2009 and the company's primary mission is to inspire people to reuse and show gratitude towards the planet. Matt Wittek the Founder & Director of Cupanion developed the innovation to address a problem of over consumption and wastefulness that he found to be prevalent in society. Cupanion has since developed different reusable beverage containers that also support water projects around the world through their Fill It Forward Campaign.

The idea for Cupanion was first developed during Matt Wittek’s time selling reusable grocery bags. He noticed that many companies used single use paper cups and he believed there was an equally convenient, yet environmentally friendly alternative in reusable beverage containers such as water bottles. So, in 2009 Matt took a leap of faith and quit his job to commit full time to developing the innovation that is Cupanion. He initially tried to launch the business by selling his idea to other companies and businesses, but found that nobody cared or would listen to what he was trying to do and that very few people believed in his mission. At the time he was frustrated, but he has since credited this experience for the success Cupanion has achieved. He took a break from trying to sell his innovation to develop a strategic business plan that allowed Cupanion to both grow as a company and stay true to their mission of reducing waste. Matt found that by taking the time to develop a strong foundation and do the right thing, the company has been able to target the right people. He explained, “The beliefs we adhere to attract the right people to the company.”

The characteristic Cupanion Bottle is one of the results of the break Matt took from selling. He spent a year developing a reusable water bottle that is modeled after a traditional plastic water bottle to allow for optimal convenience, but has unique elements that sets it apart from other bottles on the market. The bottle is made in a way that allows for easy recycling at the end of its life cycle. It does not have a silicon gasket and is made of less materials than the traditional water bottle. Secondly, the bottle is dishwasher safe and has two flat sides for easy stacking and packing. The combination of these features has created what Matt refers to as Cupanion’s “hero bottle” since it is their most popular product. It has allowed Cupanion the ability to reach an audience that is maybe not concerned with reusing or lacks the knowledge of why it is important to reuse.

As Cupanion began to grow, Matt introduced the Fill It Forward campaign. The campaign addresses two of the largest challenges facing our world, a lack of clean water or simply a lack of access to drinking water. The Fill It Forward app was introduced in 2012 which allows individuals to track their refills as each time a bottle is refilled, a water project is supported. Every Cupanion Bottle comes with a barcode sticker that can be scanned in the Fill It Forward app, or individual stickers can be purchased. Every scan gives a symbolic ‘cup of clean water’ that is equivalent to a minimum $0.02 donation from Cupanion. So, the more you reuse, the bigger the impact you have! 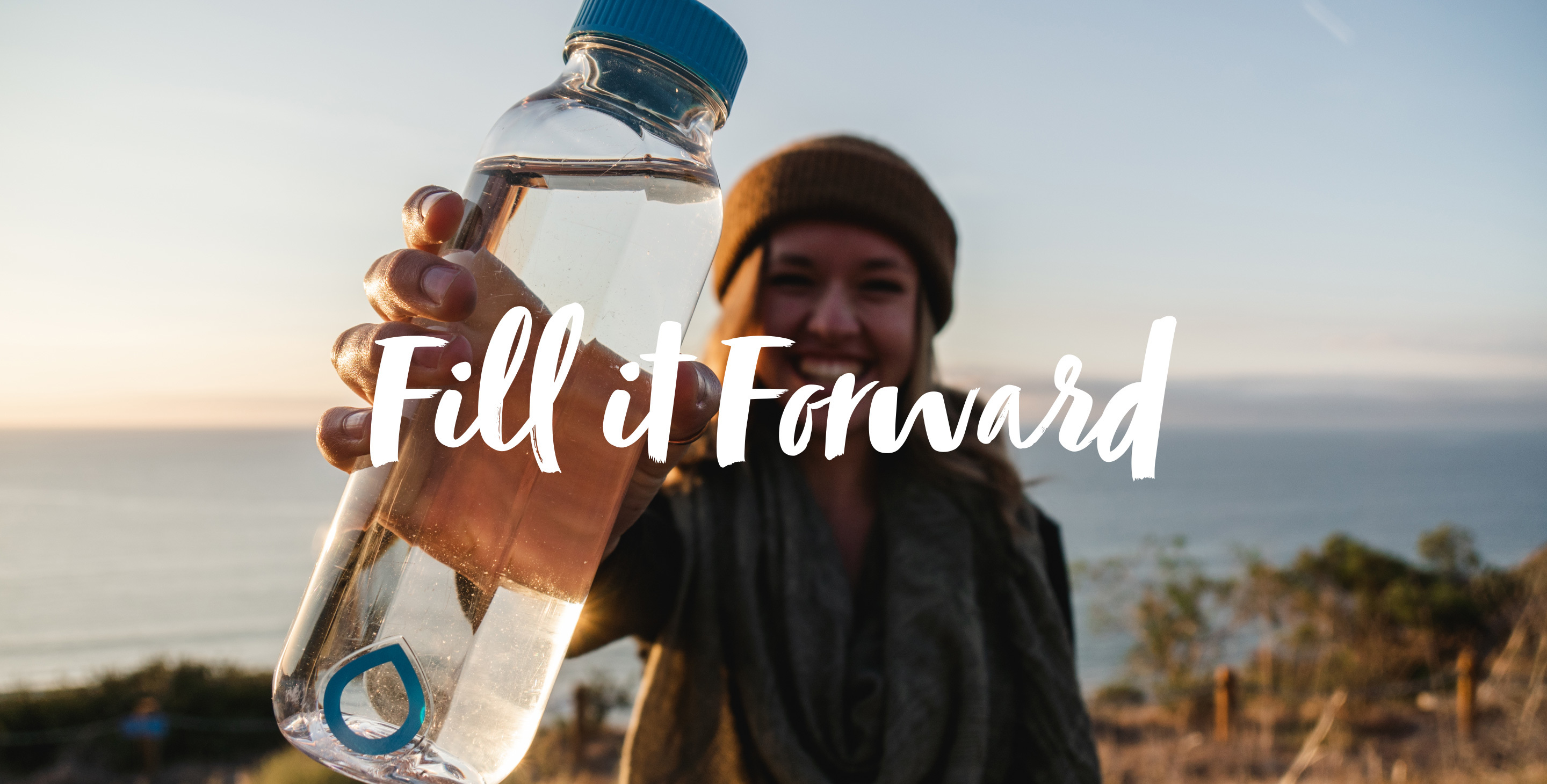 Matt was initially inspired to create Cupanion as he was aware of the environmental issue of waste production, but found limited success solving the issue during his time in the reusable grocery bag industry. He realized that in order to make a big environmental impact he needed to focus on creating a product that is already used on a daily basis and people could easily implement into their lifestyle. This revelation is what prompted him to develop reusable beverage containers that could have a large impact on the amount of everyday wasted created.

The inspiration for the Fill It Forward initiative came from Matt’s three young daughters. Collecting water is typically a job assigned to girls forcing them to miss school and subsequently miss out on opportunities to further their future. When watching them play one day he realized how thankful he is that they will never have their opportunities restricted based on their access to water. He decided he wanted to connect his business model to a deeper cause to make a difference in the lives of those who do not have access to Cupanion bottles.

Cupanion ties societal and environmental issues together through reusable beverage containers to benefit both the needs of the customer and the entire world. Cupanion’s Fill It Forward Initiative allows individuals to take responsibility for their environmental impact while benefiting more than just themselves at the same time. Each time someone scans their sticker when they fill up their water bottle, water is provided to a water project around the world and the amount of waste they are saving is tracked through the app. One 16 ounce bottle will donate two cups of water and allow the user to rehydrate. Cupanion aims to educate individuals on pressing issues facing the world through their business. Matt emphasizes that by staying true to their mission, Cupanion has been able to educate those looking for convenience about the importance of reusing.

Cupanion has the competitive edge of being a business that both satisfies a need and does good in the world. This unique combination has allowed Cupanion to develop corporate partnerships with massive companies such as Salesforce, Amazon, and Budweiser, who are all trying to cut down on their environmental impact to appeal to customers that are developing a more environmentally conscious mindset. Cupanion provides reusable water bottles to these companies and uses their own technology and the Fill It Forward App to track the number of plastic bottles being diverted from landfills. For example, at the Super Bowl Cupanion partnered with Budweiser to create an interactive competition of what team could refill the most. At Dreamforce, Salesforce’s corporate conference, 132 000 plastic water bottles were diverted and at Amazon’s User Conference, Amazon chose a specific water project they wished to support. “We want to create champions in organizations to share the message,” explained Matt. These partnerships are mutually beneficial as Cupanion gains exposure to new markets and is able to spread their mission while those companies are able to improve their own brand image through becoming environmentally responsible.

Cupanion has been able to positively benefit both society and the environment through their business model. They are a part of the United Nations Global Compact which encourages businesses to employ sustainable and socially responsible practices. To date Cupanion has funded 150 water projects around the world. The charities Cupanion partners with provide sustainable solutions for clean water that are able to make a long term impact on the lives of those in the community. Because of Cupanion, the quality of life for many girls and women in lesser developed countries has improved as globally everyday females spend 20 million hours collecting water. As of January 2020, 4,192,320 cups of clean water have been given to those in need. Additionally, the app tracks the environmental impact of the reuses of each user including the pounds of plastic, pounds of waste, pounds of power, pounds of emissions, and square feet of land that would have been used if you had not been using a reusable water bottle. Instead of constantly spending money on water bottles that just end up in the landfill, Cupanion has created a product that satisfies the need for convenience whilst still providing value to society and the environment.

Cupanion's primary mission is to inspire people to reuse and show gratitude towards the planet. Cupanion sells reusable beverage containers that address both wastefulness and water insecurity through the Fill It Forward app.