Cooking With the Sun

Solarama Energy & Services was founded in 2013 by Hassan Bahrani and is located in Marrakech. The company is the first in Morocco to offer different types of solar cookers that work only with the energy of the sun. The food is cooked very fast and it takes only a couple of minutes to boil water, saving time. The company is in fact actively contributing to the Moroccan energy transition from fossil fuels to renewable sources.

Solarama energy is a Moroccan company specializing in the manufacturing and marketing of solar cookers. The company manufactures solar cookers with a diameter of 1 meter 40 and an area of 1 meter 55, intended only for cooking. The innovation is a technique used to heat food or water by gathering the concentration of the sun's light. The sun's rays are reflected by a parabolic mirror towards a focus where a black container is positioned. The kettle heats very quickly and allows for any type of cooking including frying. However, the engine needs to be reoriented every 30 minutes in order to follow the sun's movement. The company is the first to manufacture such a product in Morocco, with components and raw materials coming from Germany. It is a reliable and good quality product. 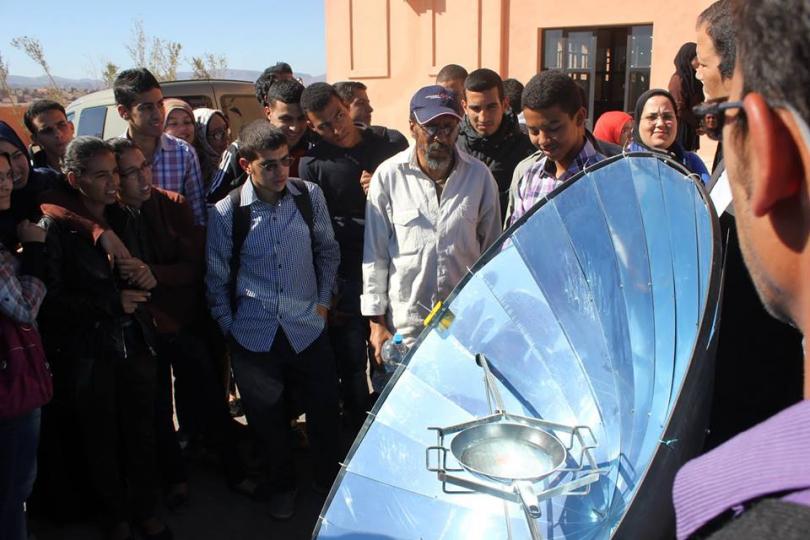 The idea was borrowed from a German company manufacturing solar ovens with which Hassan Bahrani did a three-month internship. Based on that, he created a small workshop in Marrakech and built his first type of solar cooker: a large parabola composed of mirror plates and topped by a metal frame, to support the dish while it cooks.

At that time, most of the clients were wealthy business men, hotels, B&B, mostly founded by foreigners, with a high ecological sensitivity. The CEO then realized that the main target market (rural, disadvantaged areas) could not afford the product so he decided to go through associations, NGO’s, that could seek funding from European foundations so the company would be able to offer the cookers to poor populations at affordable prices.

More and more Moroccan households consume increasing quantities of firewood, which are used for heating and cooking. Gas supply in rural areas is also becoming a real hitch for the population because snow is frequent in mountainous areas and often disrupts supply.

According to the High Commissioner for Water, Forests and Combating Desertification, the annual consumption of wood is 11.4 million tons, half of which comes from the forests. The rest is supplied by agricultural residues. According to the study, more than 88% of consumption is dedicated to rural households, especially those living in the high Moroccan Atlas. Their overuse of wood engenders an enormous amount of CO2 per year (1.8 tons of CO2 per Moroccan per year). Looking beyond the kingdom, West Africa's consumption of wood is increasing more and more, reaching incredible amounts. According to the Food and Agriculture Organization of the United Nations (FAO), the total annual consumption of wood in Ghana is about 700,000 tons, 30% of which comes from Accra. Thus, the use of solar cookers would give some respite to nature, the grounds, and trees to allow reforestation and decrease pollution in many sides of the world.

The company encountered an eminent success when first launched to the extent that, in two years the CEO managed to sell 280 cookers. This was a first step forward for the company considering the price of the product ($300) and the company's forecasted level of sales, which was significantly fewer. The company also gained rapid awareness when it first launched as the CEO got invited to many festivals and University events such as "Morocco solar festival " or the University of Ouarzazate where he exposed his innovation.

"I have a small factory in Marrakech where I employ three people full time, while I take care of all the administrative, commercial and marketing stuff" Bahrani said. To minimize his risks, he kept his job as a consultant while managing his company. At the end of the second year, he achieved a total turnover of 840,000 Dirhams (approximately $84,000 USD) and launched a new product: solar lighters in the form of customizable gadgets which gained a lot of success since they are cheaper and can light up instantly when the sun shines.

The innovation clearly had a positive impact on rural citizens as it secured the lives of thousands of people living in poor areas, especially young women who spend half of their time gathering wood instead of attending school. The product also contributed in changing Moroccan habits by raising awareness of solar energy and converting people to green and renewable energy. 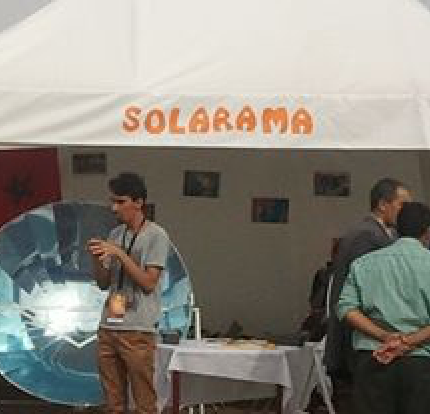 Solar energy is the most widespread and distributed energy in the world. All of humanity consumes 10 billion tonne of oil equivalent (toe) per year. This quantity represents less than 3% of what the Sun provides for free each day. This energy is renewable as long as the sun is shining. From here we can wonder: how can we put this energy into good use and capture it in our daily lives to heat or produce electricity? Hassan Bahrani found the solution by creating his company four years ago, named “Solarama energy “.“I realized in 2011 that being a business intelligence consultant in Paris is not what I dreamed of. In real, I wanted to start a business in Morocco and get closer to my family”, says Bahrani, a Moroccan entrepreneur who went to France to pursue his studies. In 2013, he came back to Marrakech and created Solarama Energy, a company that produces and sells innovative solar cookers.