Kokua Sun Care uses local Hawaii-grown superfood as ingredients in their all natural sunscreens, which promotes healthy skin and protects the coral reefs and the ocean. The company had found relatively high success and positive responses for those near the Pacific Islander area. Although it is involved in the environmental field, it is also heavily involved in pursuing its business objective. 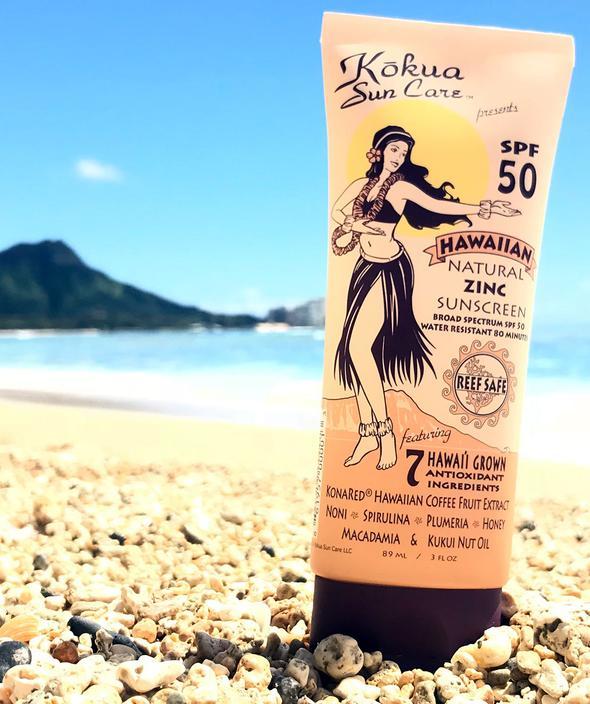 The founder, Robin, was traveling around the world as a cameraman starting from South Africa. As he is of fair skin complexion, he fell victim to numerous sunburns. When he made Hawaii his home, he became a captain and crew on private sailboats and tour ships. Knowing most sunscreens had a compound called nano zinc oxide, he forbade toxic sunscreens as they disrupted marine life by decomposing the marine plexiglass. The marine plexiglass would decay and melt, contaminating the ocean, as plastic is not biodegradable.

Kokua Sun Care Hawaiian Natural Zinc Sunscreen has a primary component known as zinc oxide, which is not dangerous to the aquatic environment. As it took Kokua 5 years to create the perfect sunscreen in their eyes, they were picky with previous components. They settled with an alloy with 25% zinc oxide, Hawaiian antioxidant ingredients such as KonaRed Hawaiian Coffee fruit extract, macadamia nut oil, Kukui Nut Oil, Noni Fruit Juice, Plumeria Extract, Noni Honey, and Spirulina. Combined with zinc oxide, the product was approved by the FDA.

Kokua Sun Care was able to connect with its user base, as it was noted 12 out of 16 approved sunscreen ingredients approved by the FDA were not only toxic to people and were also ineffective at fulfilling its intended purpose. Due to its all natural ingredient that protects users and the ocean, Kokua Sun Care quickly gained popularity within the swimming, biking, running, surfing and paddling communities, and also among coastal cities and countries, and is now even distributed in Okinawa Japan, Palau, Virgin Island, Caribbeans, and more!

Kokua plans to implement a new Kokua product next year with a darker tint composed purely of vegan materials. As such, the product will be able to expand beyond its usual customer base and be able to connect with those concerned with vegan ingredients.

Furthermore, Kokua intends to use a new packaging method using sugar canes in the future. Although it is still a sort of plastic, it is not the same kind of regular plastic which also uses petroleum. This will allow Kokua the opportunity to expand on its future customer base and emphasize its purpose by not including plastic consisting of petroleum. Although they have a slightly higher cost due to manufacturing, it is generally perceived as worth it.

Naturally, having a product that will indirectly assist the ocean marine environment will be beneficial to life regarding aquatic biology. This product will also help in protecting against deterioration of plastic, which is not biodegradable.

Chemical sunscreens and kills coral reefs, Kokua Sun Care sponsors various international events and gives out free Kokua Sunscreens to thousands of participants to promote healthy skin and to protect the ocean and coral reefs. Kokua Sun Care recently partnered with IRONMAN 70.3 Hawaii for the race REEF SAFE. Athletes will be able to use this sunscreen lotion as they participate in a world famous rigorous event.

Not only Kokua Sun Care promotes healthy all natural sunscreens, Co-founder Tatyana Cerullo, who also is a lawyer, contributed and helped with passing the law in Hawaii that bans sunscreen that contains oxybenzone and octinoxate in 2018. These two toxic chemicals are known to cause bleaching, deformity, DNA damage, and death to coral reefs which then disrupts marine life. Tatyana also wrote the legislation in Marshall Island to ban all toxic sunscreens in the country Kokua Sun Care believes in using the best, the main active ingredient in their sunscreen is zinc oxide, Kokua Sun Care only purchases non-nano zinc from Australia to ensure the purest quality for its customers. It is important to emphasize although some other sunscreen brands claim to use zinc, it is not pure, which contradicts the purpose of an all-natural sunscreen.

Kokua means “to help” and “responsibility" in Hawaiian language. Kokua Sun Care is focused on providing a safe and environmentally friendly sunscreen lotion. Located in Hawaii, this company was founded due to raising concerns over toxic lotions. It was noted by the FDA 12 out of 16 approved sunscreen ingredients were ineffective and potentially toxic. As the majority of these ingredients are not just toxic to the human skin, but also indirectly impact marine biology, Kokua Sun Care decided it necessary to invest in an environmentally friendly and effective sunscreen. As such, the company fulfills Goal 13 for addressing climate.