Valley City “is a sustainable option for not just getting rid of your old electronics while making sure your data is secure, but we prioritize hiring returning citizens, which are formerly incarcerated, people.”

Valley City Electronics Recycling is an electronics recycling center based out of Michigan that prioritizes both environmental and social sustainability. The company collects old electronics from TVs to laptops to hard drives from both residents and businesses. Guaranteeing safe data wiping, they breakdown old electronics into parts for renovation and refurbishing. The company is a tightknit “family” primarily composed of returning citizens and formerly incarcerated people seeking a second chance. Valley City cares for the environment through a zero-waste landfill policy and cares for the community by integrating sustainability throughout the company.

Electronic waste (e-waste) is the umbrella term for the toxic and hazardous materials that are found in products that require electricity or energy of some kind to operate: computers, printers, hard drives, servers, cameras, game systems, ultrasound machines, etc. These machines have many components, including precious metals that require intensive mining and manufacturing processes to power the electronics we use daily. The plastics, metal wiring, and glass also used to make these machines can be recovered and used in new or refurbished electronics. Yet, the vast majority of electronics are thrown away into landfills, where they let off dangerous fumes and poison the waters, soil, and people in the surrounding area.

So, Valley City is changing the harmful practice of throwing away electronics into a linear process to a circular process of recovery, refurbishing, and recycling. Valley City also holds R2 and B Corps certifications because of its sustainable recycling and care for the community.

Jonathan Neracher, the Special Projects Coordinator and sustainability champion at Valley City, describes their overall recycling process by stating that, “We mainly take in equipment, disassemble it into its prime components, and then send it to other specialized recyclers who grind it up, melt it, and sell it as reusable material.” After collecting unwanted electronics, Valley City employees strip the electronics and sort the components into plastics, metals, glass, and circuit boards. They are sent to other specialized recyclers who can convert these recovered materials into raw materials that electronic manufacturers need. For example, recovered plastics can be converted into new cases and covers, metals into a wide variety of new parts, and recovered CRT glass can be used to recover lead and make new products. However, many of the electronics skip a complete strip process and are refurbished for an affordable price in Valley City’s retail store and online. This saves energy, money, and exemplifies Valley City’s environmental awareness. 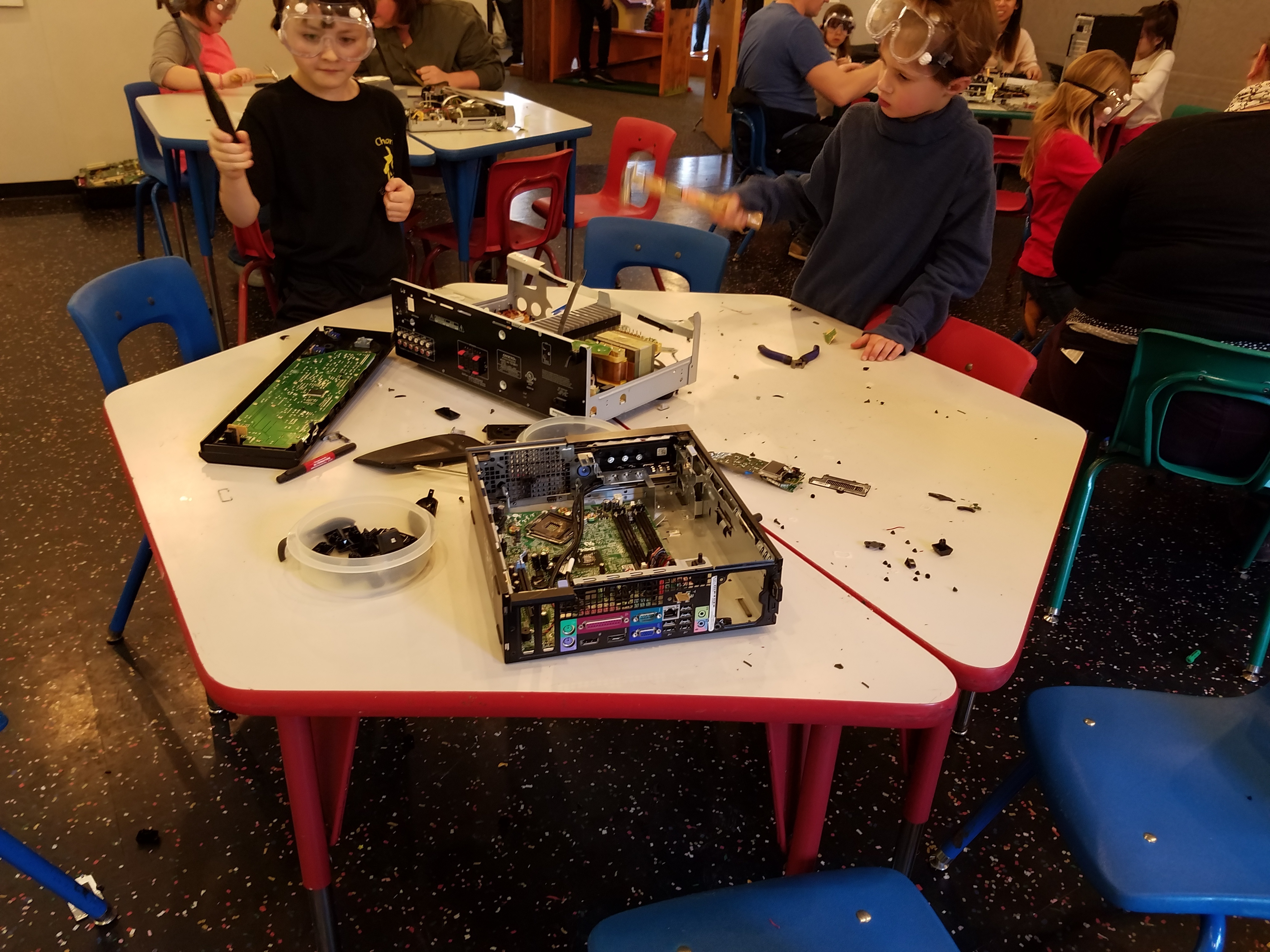 Kids breaking down electronics at a “Take Apart-ie,” an event at the local museums to teach children about electronics and recycling. Image courtesy of VCER.

“Going through the assessment like that showed we were already on the right track because of the way the company was running itself. We fit right into it.”

Several different certifications measure social and environmental sustainability, including R2 and B Corps, both of which Valley City holds. R2 is a must-have in the sustainable recycling business that ensures supply chain sustainability. B Corps is an international standard that measures commitment to social and environmental sustainability, transparency, and legal accountability while attaining profit. While reaching for this gold standard is ideal, there are many criteria to meet, which proves to be challenging for many companies.

It took father and son owners, Rick and Jason, several tries over the years to meet these requirements. To reach this certification, the team did the hard work to understand the process and realized that they had already met most of the rigorous B Corps requirements. For example, Valley City hires returning citizens and has a zero-landfill waste practice. They were pleasantly surprised to find that they bought pallets from a minority-owned company, a fact they didn’t know at the time, but which contributed to obtaining their certification. This was uplifting for Jonathan and the rest of the company to see that many of the things they were already doing were sustainable on multiple accounts.

“We’ve [got]ten some of the hardest working people I’ve ever met through giving people a second chance. And, when you have a good workforce, you can see increased profits due to people knowing what they’re doing, not wasting time, and taking the job seriously.”

Part of what put Valley City in the top 10% of B Corps certified companies worldwide in 2019 is their commitment to social sustainability. Valley City partners with several second chance companies, such as Alternative Directions, to hire returning citizens who struggle to find work due to their records. One day Jason was on the floor and “someone just came off the street, walked in, and asked for a job. And, after getting to talk, [Jason] realized that this guy had a record and was having a tough time finding a job. That set him on the path [of hiring returning citizens], realizing that this was an untapped resource and that we can find a lot of workers this way.” Since then, Valley City has hired many returning citizens who are “really hard working and care a lot about the job,” giving them training and simply a chance, something society denies to those with records all too often.

Valley City’s integration of environmental and social sustainability leads to a successful for-profit business. For the environment, it means less stress and raw material extraction for electronics, as well as the preservation of the waters and soils where landfills would normally experience toxic leaching. This also benefits the living organisms who depend on healthy ecosystems, including humans. Our health is preserved by taking steps to divert waste from the landfills, whether through direct contact at the dumping sites or through the food and water we consume that have absorbed these heavy metals and toxins. It also means less fossil fuel consumption to produce plastics and to mine and manufacture these products with each new electronic.

“What we do for business is great on one end, but how the company culture takes care of itself really means a lot to me.”

From a social perspective, Valley City has monumentally impacted the lives of those they touch. Within the company, Jonathan describes the company as “a family.” To him, it’s not just “come to work, do your stuff, and leave.” Rather, Rick and Jason work hard to make an inclusive and welcoming environment, and care about each employee; “they’ll help people get work boots if they need work boots, they’ll let them use the company vans if they need to move stuff”. They ensure each employee gets the training they need, not just to be a successful employee at Valley City but so that they have the skills they need to be successful in life and their careers. The boss’s willingness to work with each individual and meet them where they are leads to a culture that sustains the company each and every day from the bottom up. This both attracts and retains hard workers to help keep Valley City a successful company.

“When we get 40,000-50,000 lbs of electronics out of a rural community somewhere out in the state, you feel like you’re doing something good.”

Other e-recycling companies in the area charge residents for their municipal waste, while Valley City does not, despite being a for-profit company. Not only is it good for the environment, but it’s also better for the consumer’s wallet, and helps inspire citizens to recycle their electronics when perhaps they would not have otherwise. It’s a win-win for both the company and the residents.

“We’d rather get the stuff in the hands of the people rather than get as much money as possible out of people.”

One of the root causes of Valley City’s success is its resell program. They sell many secondhand electronics for an affordable price that makes them “available to everybody,” rather than trying to extract the highest profit. The cheapest computer they sell is usually around $75, a price that’s actually affordable for low-income people. After all, Jonathan points out, “if you’re buying a secondhand laptop, it’s usually because you don’t have $1,000 to spend on a new one.” Back-to-school sales are also very helpful to the community, especially this year with COVID-19 pushing many schools online and students needing computers of their own to complete classes.

One of Jonathan’s favorite parts of his job and the work that the company does are “Take Apart-ies.” Valley City partners with the local museum and brings a bunch of old electronics to groups of children who get to learn about the electronics and their functions and take them apart. For Jonathan, “it’s just so fun, it’s really nice to see how excited some of these kids are to see what’s inside of these things,” and he has a blast every time he gets to do it. It sustains him in his work and sustains the next generation of consumers by teaching them about electronics and their lifecycle.

In both the short-term and the long-term, Valley City’s sustainability guides the future towards a more sustainable approach. Every year, they divert hundreds of thousands of pounds of electronic waste from landfills from Michigan residents, protecting the environment and giving employment to several dozen people, including many returning citizens. Day-to-day, the employees engage in fulfilling work while working in a culture reminiscent of family. People across the state learn about the benefits of e-recycling and have access to affordable, secondhand electronics that also preserve the environment. Even more so, Valley City is a model company for others to learn from. Circular, not linear, processes are the wave of the future, and their zero-landfill policy, the hiring of returning citizens, and inclusive culture are ways other companies can integrate sustainability into their business.

Valley City Electronic Recycling prioritizes both the community and the environment with affordable and convenient electronics recycling and refurbishing services in the state of Michigan.