CO2 neutral is not a luxury

Zero Emission Solutions has a remarkable passion for making the future more sustainable. The study and consultancy agency quickly grew into a renowned player in the renewable energy market. To tackle the sustainability challenges, they work together with companies, who want to reduce their ecological footprint. Their goal is to become CO2 neutral as soon as possible, but they are not satisfied with just that. They always want to do better; the sky is the limit. Their ultimate goal is to become CO2 negative.

Therefore, Zero Emissions Solutions developed a unique platform using ‘Virtual Power Plants.’ This Platform is one of a kind in Belgium and Europe. They contribute to the Sustainable Development Goals: affordable and sustainable energy by providing tailor-made advice on sustainable strategies and renewable energy.

Zero Emission Solutions is a research and consultancy firm that helps other companies reduce their ecological footprint. They try to implement the latest green technologies while considering the return on investments in implementing those technologies.

They work with a unique platform using ‘Virtual Power Plants’ to connect electricity buyers directly to renewable power installations. This way, the buyer is assured that the production of a chosen installation completely covers his power usage. This differs from the usual renewable energy contracts, where there is no fixed installation that covers the usage of a particular buyer. The virtual power purchase plant allows buyers of renewable energy to choose from actual locally generated renewable power. This way, it is possible to stimulate local renewable energy production, reducing carbon emissions in their local area, thus improving living quality for the local community.

Zero Emission Solutions matches sellers and buyers by precisely measuring the output of the supplying installations and comparing those outputs to the buyer's needs. They are currently only working on a one-to-one basis, which means that one installation only supplies one buyer. They are looking to shift to a many-to-many model in the future, which would allow multiple operators in a local community to get connected. 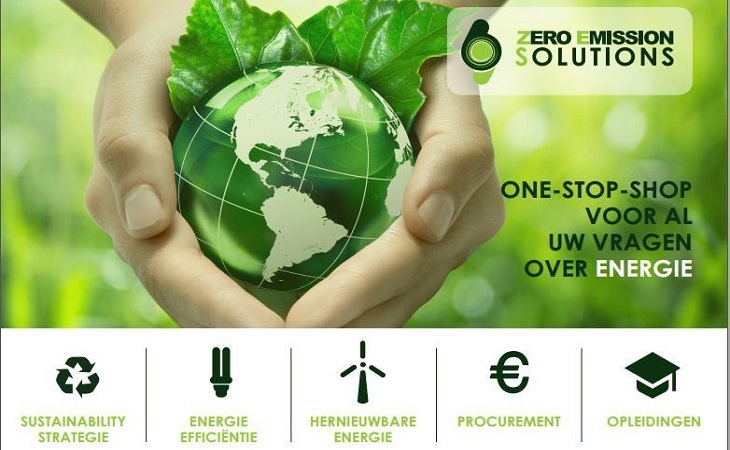 Alex Polfliet, the leader of Zero Emission Solutions, established his company twelve years ago, in 2009. He has always been fascinated by sustainability. In his younger years, he read the Treaty of Rome, which made him think critically about sustainability. He conveyed: “That treaty was right, we are killing the earth, and something has to be done."

The film Soylent green was also a trigger for him to tackle the pollution problems. This film is about an apocalyptic scenario in which it appears that the world would no longer be livable due to pollution and global warming. A second film that shocked him was "The China Syndrome," about a real-life accident with nuclear power plants. He then realized that nuclear power was not a solution and joined an anti-nuclear movement.

"The Chernobyl disaster confirmed what I already knew," said Alex. He delved deeper into what was then known as 'alternative energy' and became the founder of Zero Emission Solutions. He joined the Belgian cabinet to help write the climate law because of his dedication, problem-solving capacity, and, as he calls it, "by a twist of fate."

A few years after founding Zero Emission Solutions, it became clear to him that something had to be done about the use of renewable energy. Renewable energy was becoming more and more profitable, and this was driving the industry forward rapidly. With the quote "CO2neutrality is not a luxury, but a real necessity", the Virtual Power Plants program was introduced.

The impact of the research and consultancy services that Zero Emission Solutions provides is significant. Green technologies are developing quite rapidly, but due to the many hours of research the company does every day, they are and always will be capable of providing their customers with the best counsel for each specific situation. That’s why the combination of research and consulting is invaluable.

Zero Emission Solutions has already had the opportunity to work with around a dozen companies that want to be CO2 neutral as soon as possible, including some very renowned companies. This means that companies that were heavily involved in the emission of CO2 are turning into green corporations, which, of course, has a substantial positive impact on the environment. Furthermore, Zero Emission Solutions isn’t just aiming for big profits. They strive to offer customer-specific solutions that will maximally benefit not only their clients but also the environment.

Long-term Zero Emission Solutions will have the opportunity to positively impact the world even more because of the constantly changing and improving green technologies and the opportunity to offer their services abroad, more on this later.

Zero Emission Solutions is a growing and healthy company due to its expertise and uniqueness. They often have little competition because they always try to be first movers, making them fluid and adaptable. Furthermore, they have an extensive customer portfolio with some large, well-known companies because of their innovations. They do not distribute their profits but use them as a buffer for when things get bad. Also, they re-invest their profits to become even more sustainable as a company. For example, they bought a piece of forest in Lithuania to compensate for their emissions.

Ever since renewable energy became commercially viable, Zero Emission Solutions has tried to be the first mover in using or releasing profitable market models or technologies. This new market model, the platform they have developed on Virtual Power Plants, is currently unique in Belgium and Europe. The model is highly scalable, and there is no competition yet. With this platform, the ultimate goal is to break through internationally. They haven't done this yet because there is still enough work in Belgium at the moment. But there is a spontaneous demand from abroad, so they are going to hire extra employees to realize this.

Although the potential to become much more prominent as a company, it is not their intention to be the biggest. A personal, individual approach is much more important to them.

Zero Emissions Solutions has made a social impact. They do this by helping their customers become more sustainable. Customers usually find it challenging to become more sustainable themselves. ZES helps its consumers draw up a climate plan, reduce their ecological footprint, or organize sustainable events. Their employees use the knowledge to inform consumers and help them move forward sustainably. For example, they were asked by a multinational to give a presentation about renewable energy for plant managers. The audience in France was so satisfied that the organizer immediately asked to repeat the presentation in Sweden a few weeks later. In this way, they benefit society.

They also contribute to the environment. The company is committed to becoming CO2 neutral as soon as possible and that before 2050. They even have the goal of becoming CO2 negative. The problem is that we have too much CO2 in the air, which causes global warming. Even if we stop emitting CO2, the CO2 will not disappear. The company is currently trying to limit the consequences to ensure that the CO2 situation does not worsen. At some point, they want to remove CO2 from the air. The company will try this based on CCU: a method in which you will use CO2 to make products.

We can conclude that Zero Emissions Solutions is taking responsibility for building a better, more sustainable environment by creating a positive impact through working towards sustainability. Sustainability is no longer a luxury. It is an absolute necessity.

Zero Emission Solutions was founded in 2009 by Alex Polfliet, who has been active in the sector for more than a decade. The study and consultancy agency quickly grew into a renowned player in the renewable energy market. They contribute to the SDG affordable and sustainable energy by providing tailor-made advice on sustainable strategies, efficient and renewable energy.