Car Manufacturer Brakes Against The Use Of Water

General Motors is a company that designs, manufacters and sells worldwide: cars, trucks, and vechicle parts. One of their manufacturing areas is located in San Luis Potosí, Mexico, where it has been applied a System of ¨Zero Discharge of Water¨. This system consists of a water treatment plant that helps reuse it in production processes and other tasks needed. The chain of processes goes from filtration of water to osmosis.

This Innovation helps to solve important SDGs as: 6, 8, 9, 12 & 15. The way it helps to solve them is by providing useful infraestructure for the process of purification and efficient use of water, also by giving jobs, preserving the ecosystem and producing in a responsible way.

According to Luis Dávila, the Environmental Coordinator of General Motors, ¨The San Luis Potosí complex is the only one that does not have water discharges [...], all the water we use inside the plant is still used until the last point, where the remainder evaporates.¨ This system combines various water treatments, ranging from filtering to osmosis.

The water route in the complex begins when it is extracted from the wells of which GM has the concession title. This water must have the hardness and salts needed for the processes. Later it is used in different procedures.

When the concentration of pollutants no longer reaches the quality levels, it passes purity processes so it can be use in another area of the manufacture course. However, when its maximum use is made, it is sent to an exclusive lagoon where the rest of the water evaporates and the collected waste is sent to toxic waste.

In order to create and implement this innovation, there was a joint effort between the operational, administrative and financial areas, in addition to collaboration with the complex of GM located in the United States, to follow the development of new technologies. 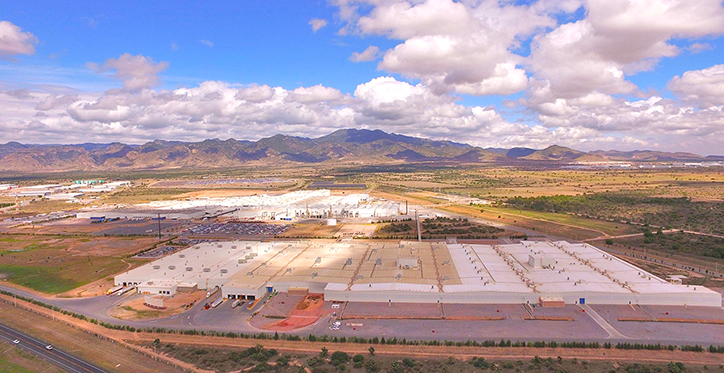 There are two main reasons why General Motors was inspired to find a way to contribute to the efficient water use:

Being in this situation where there was an economic motivation and an ecological system where it was difficult to obtain this natural resource, this system was developed.

The building of San Luis Potosí has a restricted use of water because it is located in a desert region. In this complex, they apply the Zero Liquid Discharge system to their manufacturing process of vehicles. They manage the system in which a large amount of water is saved. General Motors is not only creating vehicles, but it's also helping local people.

Since 2008, this complex has been recognized by being the first building in the history of General Motors that has this system available. According to the General Motors Mexico website: ¨The effect of this innovation is that 90% of the treated water is reused, and only the 10% remaining is sent to a lagoon to evaporate and the mud residue is used as alternative fuels.¨

More short term effects of this innovation is that it creates new jobs for the community and also is an ally to preserve the ecosystem by using the natural resources in a responsible way. This happens by not using more water than it is needed, which in turn helps to have a good profile with the community.

Manufacturing sites of General Motors in Mexico have been distinguished as part of the ¨Clean Industry¨. In 2017, the complex of San Luis Potosí received the special recognition of "Environmental Excellence" by the SEMARNAT and PROFEPA, goverment associations in charge of taking care of the environment, mainly because of the projects that implement additional to the actions of manufacturing vehicles.

The long term effect is that the company will help to preserve the water available in Mexico and to reduce costs of manufacturing. The impact that they are looking for is a positive impact in all possible areas, where they have that power of influence towards society.

Because the bussiness implemented the system of zero waste of water, positive things have ocurred in a financial approach, some of them are:

The biggest impact the company made was not only helping the environment, but also helping itself. The company has adapted through new technologies to lower water consumption and use only the amount of water necessary for the manufacture of its products, without waste. By being able to adapt to the new circumstances, the company also benefited since, when controlling the water expenditure, the water bill decreased considerably. Nowadays, the company located in San Luis Potosí is an example for the whole world.

In this innovation, another social benefit that stands out is that by reusing water and treating this natural resource as something valuable, it allows the company to be recognized among people as another ally to be able to work collaboratively. This avoids angering the community and causing demonstrations, claims or controversies that damage the image and reputation of the company. In addition to being recognized as a socially responsible company that acts in a conscientious way, by knowing the dangerous consequences of its actions, it establishes a pleasant collaboration with the government.

Also, another important social benefit is that by making the water purification process longer and more specialized, many jobs were offered to the population, which helped support the economic growth of the region.

Regarding to the environmental benefits, the main impact has been that, despite the presence of GM's manufacturing complex, the ecosystem conditions have been preserved as they have always been, without disturbing the flora or fauna of the San Luis Potosí desert where it is located. In fact, there is the ¨WildLife Habitat¨ program, where the ecosystem is protected and green areas are restored. This program has had the effect of recovering native species from the desert zone.

Also, by reusing the water, no discharge is emitted to the drainage or bodies of water, which does not disturb or continue to contaminate natural sources.

Another of the main impacts that the company has, without considering society and itself, is the positive effect on the environment. This impact was of great importance for two main reasons: first, as previously mentioned, cities close to the company stop suffering from the lack of water; and second, the company has adapted itself so that the water used is never wasted because it's used as many times as possible. This helps a lot as the world is experiencing water shortages.

General Motors (GM) is a company that designs, manufacters and sells worldwide: cars, trucks and vehicle parts. Their mission as a company is to offer products of excellence, security and good quality to their clients.

It was founded in Detroit, Michigan on 1908 and over the years it has become the world's largest manufacter of vehicles. The company started to produce in Mexico in the late 30's.

One of the manufacturing areas in Mexico is located at San Luis Potosi, where the system of zero waste of water is being used.