OCHO’s strength lies in its business model, where the running themes are community and commitment. This ethos is reflected from the sourcing of cacao right through to the packaging on the shelves. By ensuring ethical processing from “bean to bar”, OCHO creates high-quality products that support economic growth locally and in the Pacific with minimal environmental impact and encourage customers to consume in a more responsible (and delicious) manner.

OCHO’s journey began in 2013 with Liz Rowe and her passion for craft chocolate – where the manufacturer completes the entire bean-to-bar process, and no emulsifiers or other additives are included. When Dunedin’s Cadbury chocolate factory was announced to be shut down in 2017, passionate locals crowdfunded $2m to keep Dunedin’s chocolate heritage thriving. This group, now OCHO’s diverse array of shareholders, wanted to maintain the craft chocolate practices of the original OCHO alongside a strong social ethic.

OCHO sources its unroasted cacao from small-scale farms and cooperatives in the South Pacific, where they directly engage with the community to ensure their product is exploitation-free. Once the cacao makes its way to Dunedin, it is broken down into an array of chocolate products by living-wage employees at OCHO’s small and completely transparent factory. Where the husks are generally seen as a waste product, OCHO sells them to a garden centre to be used for mulch. The resulting minimal ingredient, high quality chocolate products are then sold to customers, many of which are OCHO’s local shareholders that helped to build the company in its formative stages.

OCHO is contributing to a better world by stripping away the exploitative practices of cacao farming, both for the communities and their natural environment, ensuring that everyone along their supply chain is valued fairly, and creating a product with minimal waste that is free from the harmful additives that we rarely give a second thought. As noted by Angela, “what we sell is value – if people can’t see the value in us buying directly from the farmers, making sure there’s no slavery in the chocolate, making sure that we’re paying them a good price for their beans, if they can’t see the value in us paying our factory workers living wage, if they can’t see the value in all of these things then it’s not the product for them.” 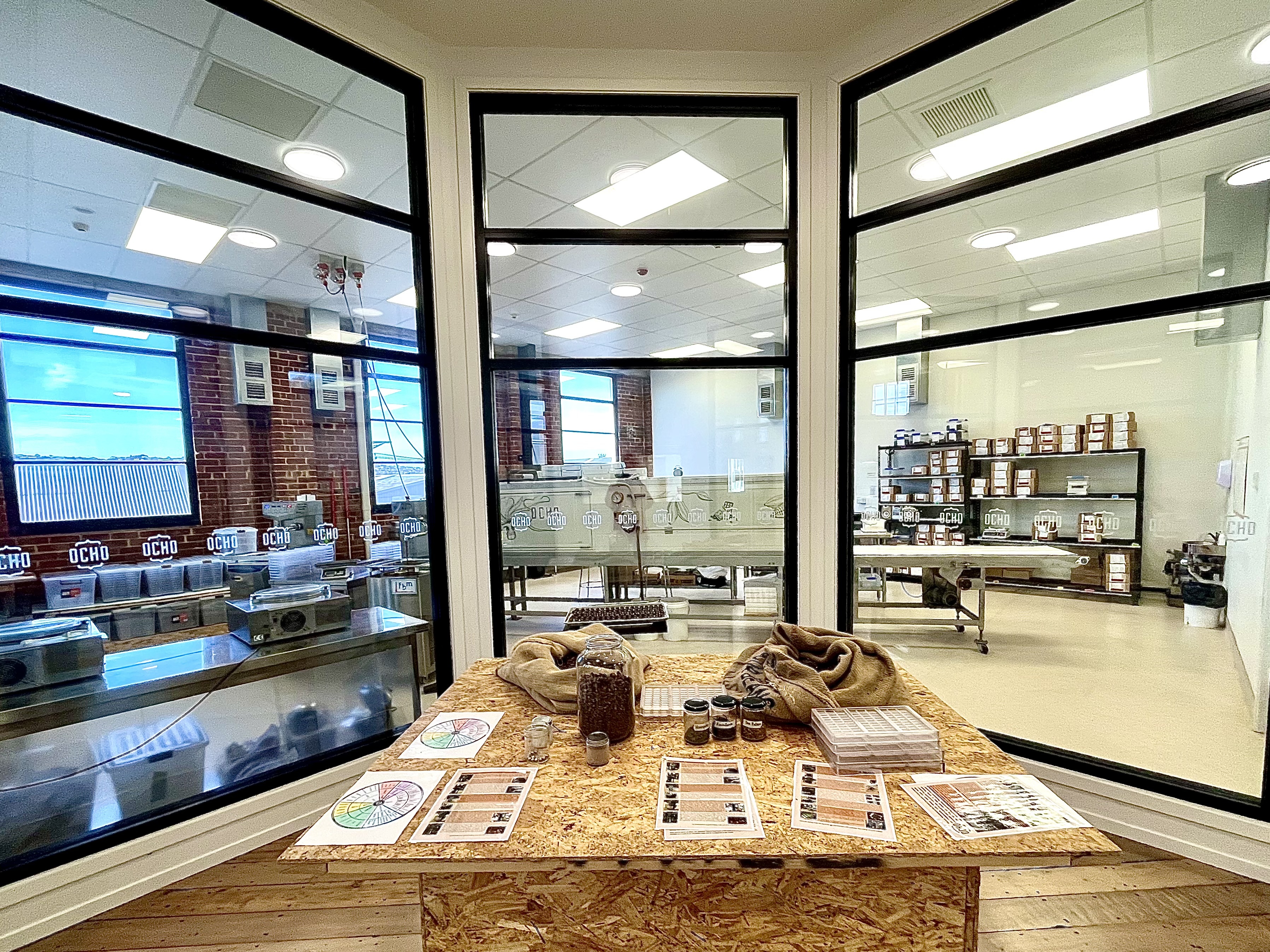 Angela hasn’t been at OCHO long, but her passion for turning what started out as a boutique chocolate manufacturer into a viable business is palpable. As general manager, Angela plays a key role in ensuring that OCHO can continue to grow whilst upholding its ‘pure chocolate’ ethos. Whilst the journey to balance profits and sustainable practices can be difficult for some, it is OCHO’s well-established and ongoing commitment to its values that give Angela clear direction. She finds that “all of the decision-making I make in my position as general manager is very much guided by our values, and they’re around transparency, the environment, and people”.

Angela’s time at OCHO has been focused on improving business processes and procedures to allow OCHO to reach scale as its products grow in demand, “what we’re doing now is we’re growing but we’re not having to grow our headcount, and the people that work here are getting more meaningful tasks”. She notes that the products themselves and values underpinning them are “already perfect,” and says she is incredibly proud to be a part of OCHO’s journey.

OCHO’s direct sourcing from the South Pacific is a key pillar of its business model that comes with a range of positive externalities. It addresses the pressing issue of deforestation and slavery practices that dominate cacao farming internationally by engaging directly with Pacific communities and ensuring every product can be traced back to within 50km from where it was grown. Furthermore, direct buying allows OCHO to ensure buyers are getting a fair price for their products, which results in buyers receiving “around 50% more money for their beans than they would ordinarily.” With little attention being paid to the Pacific in the chocolate world, OCHO is showcasing the unique and wonderful flavor potential to the rest of the world and helping growers to develop work practices they can sustainably continue into the future.

Once the beans make it to Dunedin, OCHO’s impact expands to the Dunedin community through living wages and pay ratio policies. Employees are well remunerated and menial tasks are automated so that they can focus on the true craft. The company was able to support and retain its core production team, even in the face of the pandemic, highlighting the enhanced ability to retain employees when they are within a fair working environment.

OCHO’s environmental impact is not limited to its sourcing – the minimal waste from production and mostly compostable packaging allows for responsible consumption at the consumer end and sourcing the beans from the nearby Pacific results in significantly reduced travel-related emissions than if OCHO defaulted to Africa.

In the short-term, OCHO has created a business model which serves to enhance the communities with which it interacts, be it through working conditions, minimal waste, or offering a healthier product to its consumers. It now joins New Zealand’s few craft chocolatiers to highlight the benefits of ethical and mindful production chains and bring increased awareness to the oft-overlooked malpractice of the larger industry.

OCHO’s business model is poised to benefit from the global move towards social responsibility. Angela gave an illustrative example with reference to the egg industry, “20 years ago, we didn’t know how bad hens had it. As soon as we learned, incrementally people started moving to free-range eggs. Now, you’d have to be a bit mad to buy caged eggs. This is ultimately the trajectory that chocolate is on. When you actually understand the slavery in every piece of chocolate you’ve ever eaten, when you understand the terrible business practices, when you understand deforestation, when you understand all the additives they put in it, all of these things make you think twice.” Sourcing the beans ethically also brings a point of uniqueness – only 1% of the world’s cacao production comes from the South Pacific. When taking all this into consideration, alongside the exponential growth in other craft products such as beer, OCHO is a well-positioned early entrant to a market that seems inevitable to grow.

An unexpected resource also arises from OCHO’s distributed ownership structure. “They’re an amazing source of expertise and advice,” says Angela, recounting a time she put a call out to the shareholders to find someone with experience getting products into supermarkets and ended up recruiting a consultant from the process. The shareholders are also big supporters and customers, “We also have shareholder volunteers who come and work in the shop in the weekend. It’s quite like a collective.” The sense of shared ownership, with no shareholder able to hold more than 11%, has created a reliable customer base with a long-term commitment to helping the company grow.

Heed is given to the environmental impacts of OCHO’s operations at every step of the way. By interacting directly with growers, the company is able to ensure that the deforestation practices rife in other cultivations is not happening in the Pacific. Once the beans make it to the factory, the focus shifts to what is kept for the products, “There’s no waste,” Angela tells me, “Even the husks we sell to a garden centre to be used for mulch.” The thought extends to the packaging, where everything is compostable except the metallic labels. That’s not enough for Angela yet, who tells me that, “we do have a new bar coming out soon which will be printed directly on to the compostable wrapper with soy-based ink.”

The benefit of direct engagement with growers extends from favorable prices to helping them instill ideal practices over the long-term. The ongoing support of small Pacific communities will help to ‘spread the word’ on the relatively untapped cacao resources and grow their access to new markets. Angela tells me that fair employment has always been a fundamental consideration from the beginning, “since the fundraise and the new business, [living wage] was one of the priorities.” This aligns well with the community-ownership structure to increase the visibility of craft chocolate and its perception as ‘confectionary’ as opposed to a quality product, a shift that will help to open up the market with consumer-consciousness.

OCHO is a craft chocolate manufacturer located in Dunedin, New Zealand. The company is committed to making exploitation-free chocolate with cacao sourced from communities in the South Pacific. This cacao is transformed to a range of additive-free products with minimal waste and sold throughout New Zealand. OCHO also has a strong social commitment – evident by its title as Dunedin’s first Living Wage Aotearoa authorized company.