Despite being in the bakery industry, Breadcraft's innovation is rooted in the farming and harvesting of crickets for their cricket wraps. The way Breadcrafts crickets are farmed allows for speedy reproduction, scalability, less resource input, and lower emissions compared to the farming of other protein sources. This system which consists of several innovations helps achieve the Sustainable Development Goals (SDGs) of:

The production and harvesting of crickets are a system that encompasses several innovations. John Hart, who is the future foods manager, along with his team is responsible for these innovations which all contribute positively to some of the United Nations' SDGs. Breadcraft's cricket farm consists of a large 40-foot shipping container stacked with smaller boxes that are inhabited by crickets found in New Zealand. This is to avoid introducing foreign crickets into the local ecosystem in the extremely unlikely event that the crickets escape. The cricket boxes are stackable, allowing for large amounts of protein to be grown in a small land area.

"Boxes can be stacked to arguably any height"

Breadcraft's cricket farm has a maintained heat of 30 degrees Celsius. This is to recreate the breeding conditions of spring. Maintaining this temperature allows for year-round breeding of crickets. Crickets take between 6-7 weeks to reach maturity and are then harvested and breed quicker than rabbits. Breadcraft uses this temperature, along with moisture created by crickets metabolizing food, to create a closed-loop water system. The moisture is harvested from the air and condenses on a surface where the crickets are stored. The crickets can then drink the moisture without risk of drowning or being infected by stagnant water dishes.

"No water outputs, no waste, no pollution"

This innovation allows for crickets to get enough water without any inputs. The crickets are harvested, dried, and turned into flour to be incorporated into wraps. The cricket flour is 60% protein and has health benefits relating to gut health by reaching the large intestine and feeding good bacteria. The only by-product of farming these crickets is a nitrogen-rich fertilizer called "frass".

This idea originated due to Breadcraft giving Hart free reign in creating a cricket farm to supply sustainable cricket flour for one of their products. The closed-loop water system was a result of finding the best way to give crickets water without drowning them or manual inputs of water. The innovation relates to Hart's mission to innovate, grow, and see how ideas can develop. Hart has a background in traditional farming and wanted to find new and sustainable ways to grow protein. Hart stated that farming of meat and monoculture crops leads to the loss of land, resources, and biodiversity.

Breadcraft and Hart have created a system for harvesting a sustainable protein source that provides health benefits. These crickets require fewer inputs and have positive outputs compared to other protein sources. This has contributed to achieving the SDGs of: Zero Hunger; Good Health and Well Being; Industry, Innovation, and Infrastructure; Responsible production and consumption; and Life on Land. 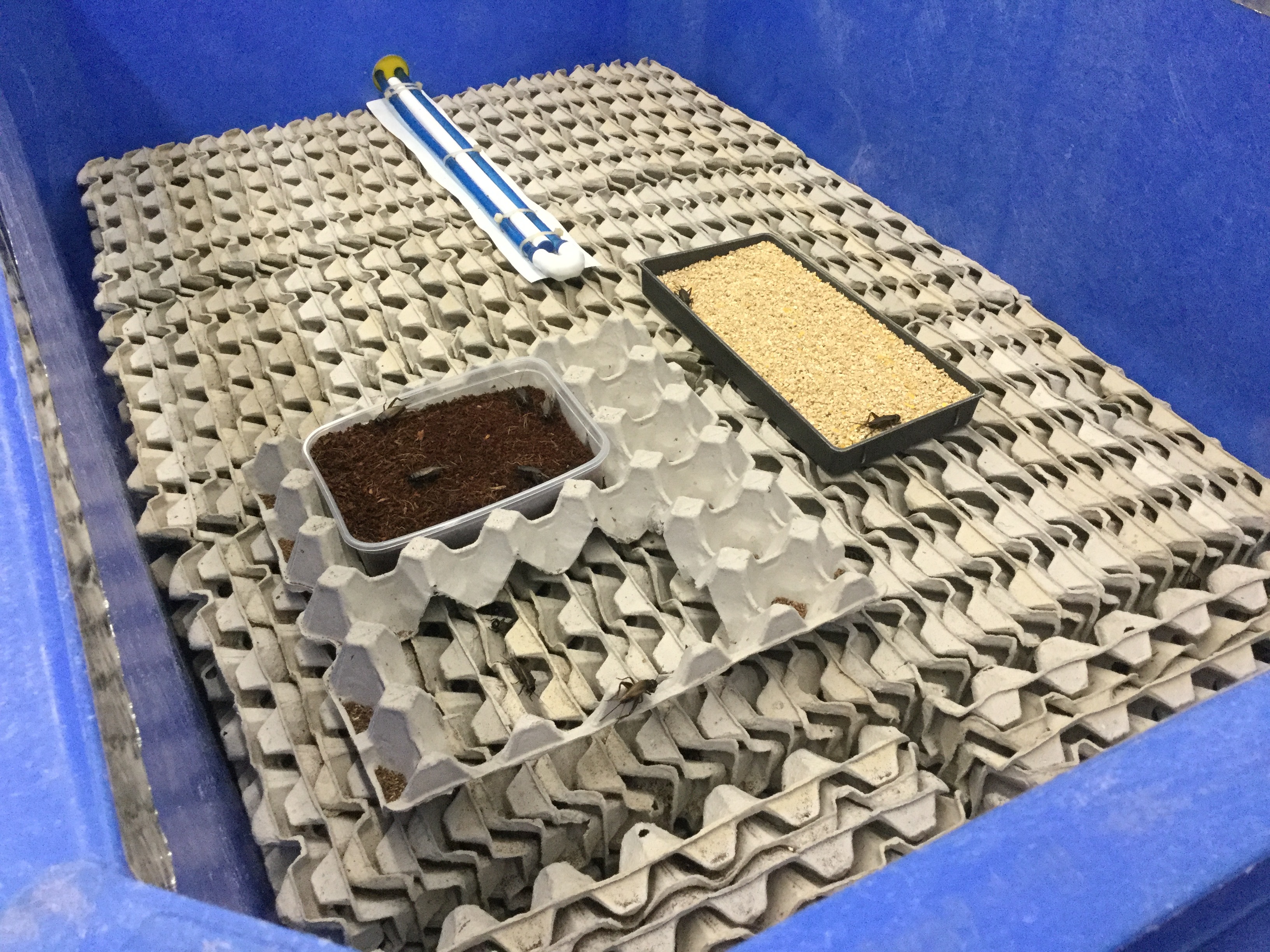 Interior of a Cricket box

The system of producing and harvesting crickets was inspired when Hart was recruited as a consultant to help create a cricket farm to supply cricket flour to Breadcraft. Breadcraft had been importing their crickets from Canada and wanted to pursue ways to locally source their cricket flour. This was the inspiration for the inception of the cricket farm. Hart's initial experience with the company consisted of him finding the best practice to farm crickets.

"My internal motivation was huge, I just wanted to see how it all happened and turned out"

This included where to source them, how to grow and feed them, and how to make this whole operation sustainable and scalable. This was the inspiration for allowing the farm to grow without taking up more space through stackable cricket boxes. The by-product of farming crickets is nitrogen-rich fertilizer, which is also an inspiration for engaging in this innovation. Hart was motivated by nature to create a system that produced no waste detrimental to the environment and which was not taxing on any natural resources.

"How do I take waste and make it a resource. It's the mental pattern of turning waste into something more valuable"

"There is no such thing as waste in nature, something is used in some scale. I needed to figure out how to weave stuff back in"

Hart had experience in traditional methods of farming protein and wanted to apply similar patterns to cricket farming in a more efficient manner. The systems of feeding the crickets water did not align with this efficiency as crickets kept drowning in water dishes, and they were still requiring water changes. This inspired Hart and his team to use the high temperatures of the enclosure and the moisture created when crickets metabolize their food to create a closed-loop water system.

"The patterns of breeding stock, raising them up, harvesting them, animal husbandry is a different scale and time frame, but mimics patterns of traditional farming"

The impact of this innovation was that Breadcraft was able to prove something they did not know before. That New Zealand crickets are better for their product compared to imported crickets. They identified this by quietly comparing their product with those they had imported. The long-term impact of this farming system innovation is that the innovation has had a flow-on effect on the wider business. Typically, bakeries follow well-established traditional recipes. Breadcraft has forced itself to engage in research and development in an industry which in the past has typically avoided it. The impacts on society in the short term are providing an ethically sourced, healthy, and sustainable product. The long-term impact on society of this innovation that the sustainably produced powder breaks down the stigma of using crickets and other bugs as viable sources of protein that can match that of traditional protein sources. The immediate impact on the environment of this innovation was that no water was needed to be added to the farm. Through locally sourcing and producing their own cricket flour they reduced their emissions from importing crickets globally, leading to a reduction in environmental impact.

The evidence of the impacts can be found in the success of the product being stocked. Local supermarkets across New Zealand and whole-food sellers stock these products. The evidence of environmental impact can be seen in the reduction of water use. Typically, crickets require 1 liter of water to produce 1 Kilogram of protein. This system has allowed for the water inputs to be reduced whilst producing more protein in less space than conventional farming methods.

“In terms of benefits to the business, it has required us to use creative problem solving”

Breadcraft has also benefited from growing their own sustainable crickets as they save money by not importing crickets from around the world. The innovation has allowed for the use of fewer resources with the potential of the fertilizer by-product being sold commercially. The business has new and innovative ways to build upon the system they have already established. Hart wants to continue to iterate and develop ideas that will close more loops in this cycle. Research and development allow for the creation of new opportunities and the sustainable growth of Breadcraft into new areas.

"You are not forced to do research and development in the baking industry, we benefited from a change of attitude towards innovation"

Breadcraft currently holds a monopoly on cricket farming in New Zealand. They are industry leaders with a first-mover advantage as they are the first cricket farm to be established in New Zealand. This benefits the business as currently there is no local competition. Breadcraft has free reign over the industry yet chooses to operate ethically and sustainably. The benefits of this innovation to the business are not just local. Currently, Breadcraft has the only cricket farm with a closed-loop watering system. This puts them in a great position to continue to innovate within the insect farming space.

“No one in insect farming has done this”

Breadcraft is currently in a strong position in terms of cricket production. They will use these ideas to further develop ways to sustainably develop protein, on a large scale.

This innovation provides benefit to the environment as Breadcraft has confirmed that there is a sustainable way to grow large amounts of protein, quicker than traditional farming. Utilizing sustainable cricket farming, Breadcraft bypasses the inputs used for mono-culture crops such as quinoa or kale and traditional meat farming. In mono-culture crops herbicides, pesticides, and large amounts of water are used to sustain growth. One cow requires 1 hectare, 18 months to grow, and thousands of liters of water, and thousands of kilograms of food.

A 400-kilogram cow would give around 50kilograms of protein. Breadcraft can produce tonnes of protein at the same time frame and the same land areas as a cow. This benefits the environment as the inputs required for sustaining cricket farming are low, whilst there are little emissions and positive outputs. This is essential to the environment as resources become more finite and populations grow. Breadcraft and Hart are promoting sustainable farming of sustainable food with all the amino acids essential for life and a protein profile like that of chicken or beef. There is potential for this system to provide more benefits to the environment in the future. With the prospect of incorporating waste food and waste heat into the system, Hart hopes to close more loops and utilize waste.

This innovation benefits society as there is currently a stigma surrounding eating bugs. The health benefits and sustainable production of the bugs are undeniable; however, consumers still need to get their heads around it.

"On paper, it's the perfect food but you still have to get people to get their heads around it"

Breadcraft has eliminated the need for fear by incorporating the cricket flour into tortillas. This removes the stigma of eating bugs as the product is incorporated into a common food. These wraps allow for consumers to consume ethically as they are purchasing sustainably and ethically sourced products. 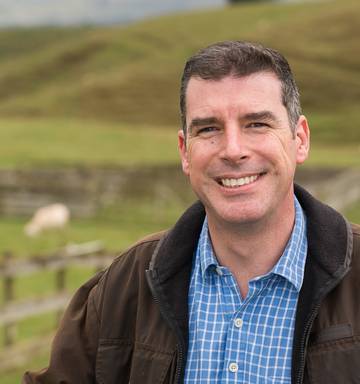 Breadcraft is a commercial bakery that produces traditional products such as artisanal loaves. Breadcraft also innovates within the baking industry, utilizing a range of alternative ingredients such as cricket, hemp, and purple corn. The use of these ingredients provides a host of benefits to the consumer and the environment.