Pivot Energy’s innovation lies in the process of providing their services to the various companies and facilities that hire them, as well as the network of connections that are formed from the interactions. There are multiple stages of utilizing solar power. The early stages of providing solar power involve reaching out to the customers to determine their needs. Nichole Sivers, the Director of Business Development, describes the process as "an outreach and evaluation." With her position, she often responds to customers interested in solar power and assists in evaluating current energy usage. From there, calculations are made to see the potential offset and saved costs. Development of the solar project continues from there, as Pivot Energy then works with sister companies to produce and provide the energy to meet demand.

To achieve the goal of their innovation, Pivot Energy works alongside a range of partners to effectively provide their services. Companies, such as Arcadia, work alongside Pivot Energy to provide solar energy in a series of projects. These projects are a combined effort, where Pivot Energy combines its resources with its partners to achieve the desired goal. Through partnerships such as these, Pivot Energy seeks to expand its network and improve communities through the connections made in the renewable energy field.

To combine the various goals and innovations effectively, Pivot Energy developed the Triple Bottom Line Plan. This plan is key to the company's culture and works alongside its mission statement to maintain its vision. The Triple Bottom Line Plan is a metrics system that seeks to balance growth in three areas. The three areas are people, planet, and profit. By balancing these three areas, Pivot Energy works to benefit its customers, the planet, and the company itself. 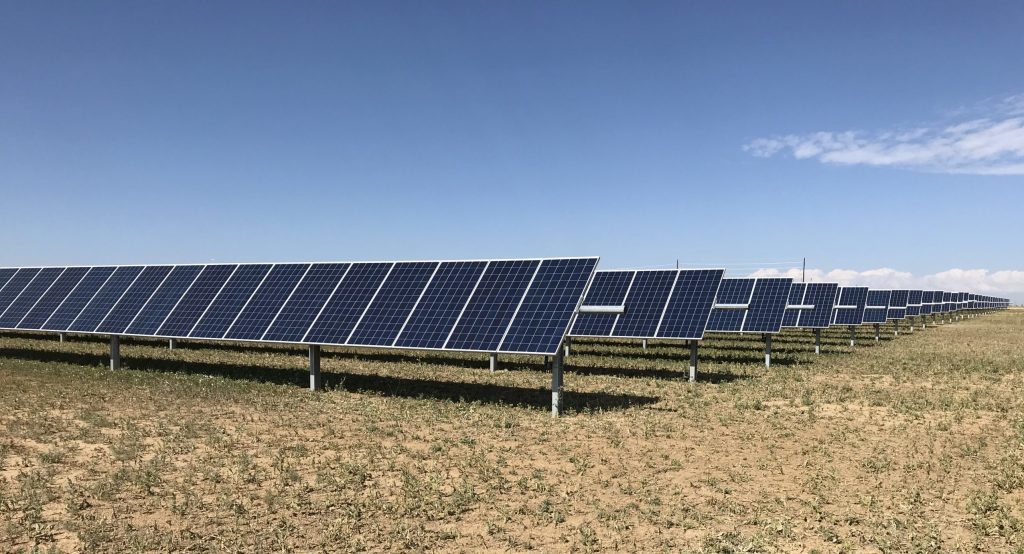 When Pivot Energy was started, the goal was to help accelerate the transition to a cleaner and decentralized approach to power generation. This was also backed by the desire to help regional businesses manage their own impacts. While the company was initially focused around Denver, the business began to spread nationwide with several locations in the Midwest, West, and East.

As the Director of Business Development, Nichole Sivers’s regional area of focus is the Midwest. With previous experience at other electric companies, Nichole decided to join the company recently to work in an ecofriendly company and provide services in familiar territory. With the current mindset changes about being ecofriendly that were occurring, Nichole utilized this to promote business sales while also showing the business benefits of solar energy to the customers.

Pivot Energy’s efforts provide a variety of impacts. By promoting solar power, the energy used comes from a more sustainable and cleaner source. Working alongside developers have allowed for multiple connections to be made that expand the network of businesses and community interactions. Certain locations have legislation that makes providing solar power difficult, yet Pivot Energy has worked by the laws to provide solar power with incentives that benefit all parties involved.

With the focus upon solar energy, Pivot Energy supports SDG 7: Affordable & Clean Energy. The promotion of cleaner energy is part of its mission statement, and to achieve this, sustaining the network of business connections is an important goal. As a result, the efforts made to make and maintain these connections have allowed for a variety of opportunities to be made in the field, resulting in community benefits such as solar gardens. The solar gardens benefit the local communities in power and costs, supporting SDG 11: Sustainable Cities & Communities. Pivot Energy works within several fields, including public and private facilities, resulting in a larger impact. This range of interaction promotes the extensive usage of solar power in a multitude of situations, fostering its own set of innovations and usage. Pivot Energy supports SDG 9: Infrastructure, Industrialization, & Innovation in this way.

The benefits that businesses can reap vary. The environmental benefits of utilizing solar power can be a selling point for any business that wants to be environmentally aware. From Nichole’s perspective, one of the larger benefits to business comes in the cost of purchasing solar power. There are various incentives and in one case, the interested party was paying 9 cents per kilowatt-hour, and through the purchase of solar energy, the cost was reduced to 7 cents kWh. This benefit increases its impact as time goes on, as the small amounts saved can be reinvested or spent on other business expenditures, allowing for future profits. Through utilizing solar power, electricity costs can be reduced and the funds can go elsewhere in the business’s budget.

Pivot Energy has a network of the various companies, facilities, and communities that they have provided service to. While some of these may not directly interact with one another, their connection with Pivot Energy allows them access to a system that provides sustainable energy. This opens potential future interactions with members of similar fields and other sustainable infrastructure.

With the work that Pivot Energy has done, benefits do arise in the community. Nichole found that schools were often interested in solar power and several have been testing periods for using solar power. This has opened the possibility of future interactions of sustainable energy and service to public functions. Another project that is gaining traction is the community solar gardens which support local businesses and save them money that can be utilized for other expenditures. This money can remain in local communities, which provides economic benefits.

Utilizing solar power has also provided benefits to the environment as it utilizes a cleaner form of energy. Solar energy is renewable and can be achievable in a multitude of locations. There are no carbon emissions from utilizing solar energy and solar panels can be integrated into locations nearby communities with little risk to the public. From Pivot Energy’s calculations, the lifetime offsets for their solar arrays result in 678,108 megatons of CO2 avoided or about 740 million pounds of coal not burned. This is a significant reduction in carbon emissions that positively affects the air quality of the surrounding environments.

Pivot Energy is a privately owned company that focuses on providing solar power to industrial and commercial services. Pivot Energy originated in Denver, Colorado, and has begun expanding to locations in the Midwest. Pivot Energy works with customers to provide a distributed energy platform that benefits both the customer and the environment. As a national leader in onsite solar projects and small utility solar projects, Pivot Energy strives to accelerate the approach to a more decentralized and cleaner source of power generation.