Blending technology with Indigenous practices - Made in India

In countries like India and Africa, consumers are fond of Chakki Ground Wheat Flour rather than Roller Mill Ground Flour. Traditional Chakki Grinding Mills are either hand operated or too "mechanical", leading to the entire process becoming cumbersome and time-consuming. To satisfy the needs and desire of customers effectively and efficiently mill owners always look for the ways to make milling better, faster and easier. Wonder Mill is a "smart" and innovative product offering from Choyal Group. Wonder mill is a completely automated flour mill (Chakki Grinding Mills with Stone), which facilitates remote control of its operations through integration of wireless network services. The product is Smart with digital capabilities such as Power Saving, Wifi Connectivity, Android Application based monitoring & control system. Along with Wonder Miller, Wonder Mill is the World’s first fully automated touch screen integrated flour mill. Wonder Mill also integrates many efficient features like Easy Operation, less to negligible human interface, high engraving precision, advanced performance, benchmarked Data and so on.

Wikipedia sources state that the earliest known usage of flour mills to crush wheat seeds to make flour dates back to as far as 6000 BC. Flour is an indispensable raw material for a major portion of the Indian cuisine. While urban and semi-urban areas rely on the roller millled flour, majority of rural and township areas still rely on flour grounded on chakki mills. The flour that is manufactured as a result of stone or chakki grinding retains much of its nutritional value as the germ and bran are retained. Roller milled flour is easily available and is the main component of baked goods and the flour facilitates more "fluffiness" in baked items. In India due to the Public Distribution System (PDS), the availability and consumption of flour, majorly roller milled, has more than doubled in rural areas and increased in the urban and semi-urban areas, since 2004, which also shows a decline in the consumption of rice. Roller milled flour also enjoys the advantage of being cheaper than chakki grounded flour, which also has a shorter shelf-life than the former. While being indigenous and traditional, one may be quick to state that with the added "titles", chakki grounded flour is bound to be more expensive. After thorough research, it has been finally deciphered that most of the price "upscaling" of chakki grounded flour is due to the fact that there still exists ancient and inefficient machinery that is used to ground the flour, which is coupled with increased human involvement and greater time for production. These factors are majorly responsible for the higher price "tag" of chakki grounded flour including other factors such as a proper distribution network.

The R&D department of Choyal group unearthed the real issues behind Chakki grounded flour and came up with an innovative solution to the problem. Today grain milling has become a science involving new and innovative approaches consisting of high technology machinery. The machinery should be able to integrate the phases of the milling process including storing, sorting, blending, cleaning, conditioning, grinding, sieving, purifying and packing. To satisfy the needs and desires of customers effectively and efficiently mill owners always look for ways to make milling better, faster and easier. Domestic millers often face problems regarding grinding as they have high-tech machinery for all the processes of milling except Chakki grinding. There is a demand for high-tech grinding, but the millers are helpless as the Indian Chakkies are manual. Choyal group came up with the novel idea of automating the Chakki grounding process to make it more pleasant, quieter, cleaner, and easier. As a result, Wonder Mill and Wonder Miller were born. Wonder mill is a fully automated chakki grounding machine with salient features like being Smart with digital capabilities such as:

Also, Wonder Mill along with Wonder Miller is the World’s first fully automated touch screen integrated flour mill. The combination is designed to Save Power, increase production and to improve the quality of the produce. Wonder Mill also integrates many other salient features like Easy Operation, less to negligible human interface, high engraving precision, advanced performance, benchmarked Data and so on. 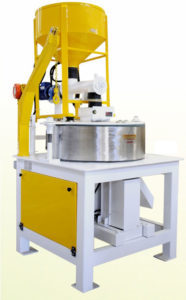 Most of the milling machines, such as the roller mill and Emery Stone flour mills, were developed in the 1900s, but they are still used in present-day mills. The redundant technology fails to tackle the demands of the present grain milling industry, involving new and innovative approaches. There is a demand for high technology machinery during different phases of milling process including storing, sorting, blending, cleaning, conditioning, grinding, sieving, purifying and packing.

Wheat-based products are an indispensable part of the Indian cuisine, with high levels of consumption, largely unaffected by changes in its price. In fact, changing trends show a shift towards larger wheat consumption and a decrease in annual rice consumption. India is 2nd largest producer of wheat, producing 85-90 million metric tons (MMT) every year, accounting for 12.05% of the total world wheat production. 40 to 45 MMT of wheat is ground to produce whole wheat flour in mills. Chakki mills have been constant sources of flour throughout Indian culture and history, but traditional chakki grinding machines are outdated and the market demand for roller-milled flour has increased drastically. Nevertheless, the demand for chakki grounded flour still enjoys constant demand due to its high nutritional value. To satisfy the needs and desires of customers effectively and efficiently mill owners always look for ways to make milling better, faster and easier. Millers often face problems regarding grinding as they have high-tech machinery for all the processes of milling except Chakki grinding. When they want more high-tech grinding, they are helpless as the Indian Chakkies are manual and highly outdated.

The R&D department of Choyal group always strives towards identifying problems and hurdles in the grain milling industry and coming up with efficient solutions to those problems. The legacy of the founders, Mr. B.M. Choyal and Mr. R.D. Sharma, who were visionaries and pioneers in the field of grain milling, has always been kept alive through the endearing efforts of the R&D department of the Choyal group. As a result of their dedication to finding real-time solutions in the milling industry, Wonder mill was created. Imagine if millers were provided with an automated solution to their milling woes; a chakki-grinding machine, which can be operated remotely from any corner of the factory, workplace or through a laptop or a mobile phone. Wonder miller is not only "smart" by today's technology standards it also makes the milling task more pleasant, quieter, cleaner, and easier. Operating levels are increased and final goods turnover is greatly increased per operating cycle.

The innovation by Choyal industry has impacted the grain milling industry greatly. The innovation has replaced the much-dreaded void in the milling process. Initially, preceding the innovation, the milling process involved the use of high-tech machinery which performed with immense precision and efficiency, but the process of grain-grinding was always performed using outdated machinery from the 1900s. As a result, the grinding process was the bottleneck of the entire milling process. This was also one of the pivotal reasons for millers to start replacing chakki-grinders with roller mills, which were easier to operate, quicker and more efficient than the former.

"Our USP – Your Decision"

The innovation has not only created a disruption in the market for "flour milling machines", but also helped increase demand for "chakki-grounded" flour against the prevailing "roller-mills" grounded flour. Moreover, the indigenous practices of the "grounded floor" societies have been revitalized with the innovation, thereby opening up new market opportunities in developing countries like India as well as continents like Africa.

R. S. Choyal: “In today’s highly competitive business environment, there is tremendous pressure on organizations to offer quick and effective customer support. Providing technical support from the comfort of the office allows us to resolve nearly 80% of all technical issues encountered, and subsequently saves time and money. The use of remote desktop software has clearly reduced costs and increased customer satisfaction due to the quick response time.”

Grains arriving in the mill usually contain foreign matter, such as strings, straw, parts of bags, wood, stones, or metal that must be removed before processing. The contaminants usually become mixed with the grains in the field and during its transfer through the various stages of the grain processing and grain-handling system. In addition, grains always contain some seeds of other plants, even if grown under the best conditions. If farming or environmental conditions are poor, the amount of screenings is likely to increase. Although part of the foreign material (dockage), or all of it, is discounted in the trade, the cleaning system in the mill should be designed to allow the miller enough flexibility to properly clean any Grains arriving at the mill.

The CLEANING SECTION is subdivided into-

To make effective cleaning they need proper cleaning machines for getting the best results. Customers can find suitable machines for every need from their vast range of grain processing machines. 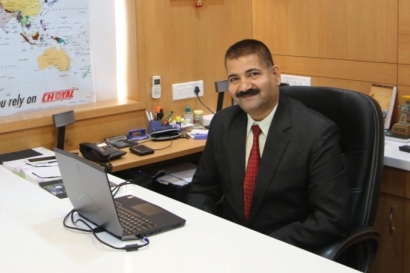 "Choyal" was incorporated as the brand name in 1965. Established as Shri Vishvakarma (Emery Stones) Industries Pvt. Ltd., the Choyal group are manufacturers and exporters of Emery Stones, Flour Mills and Turnkey Solutions for Flour Milling. Under the "Made-in-India" initiative, they are the first company to export the Emery Stones and Flour Mills. Their products are "Smart" with digital capabilities such as Power Saving, Wifi Connectivity, Android Application based monitoring & control system.