A Window on a Sustainable Future

Fossati Serramenti is a company that deals with the production and marketing of fixtures throughout the Italian territory.

It is a business that has gradually implemented a sustainable approach in recent years.

The Global Goals on which the company focuses are no poverty, good health, renewable energy, responsible consumption, sustainable cities and communities, good jobs, and economic growth.

Fossati Serramenti was born in 1920 from the idea of Giovanni Fossati. The activity initially focused mainly on woodworking but, in 2008, Giovanni Fossati, grandson of the founder, had the intuition to focus on the processing of PVC profiles.

Initially, the production plant was a small workshop located in a small village near Piacenza; currently, with a turnover of around 27 million euros, Fossati Serramenti is one of the market leaders in the national territory sector.

The company's core business is the production of windows, blinds, doors, and shutters; in the last few years, the CEO has decided to take part in an innovation process towards a more sustainable production both from an environmental point of view and from the respect and well - being of employees.

According to the CEO, Innovation is a fundamental element that makes one company distinguishable from another. It is the sign that distinguishes a company that evolves and manages to absorb what is positive in the news.

The specific innovative solution lies when the company embraces sustainability and reflects it in all company's areas, from production to offices, to common areas. Specifically, the UN SDGs pursued are: "No poverty", "Good health", "Renewable energy", "Responsible consumption", "Good jobs and Economic Growth", and "Sustainable Cities and Communities."

"No poverty" consists of an increase in wages of 25% and 50% for overtime; "Good health" in the use of machinery and specific solutions that makes workers' lives easier;

"Responsible consumption" is realized through recycling and the "tritek machines";

"Sustainable Cities and Communities" with the distance from the inhabited center;

"Good Jobs and Economic Growth" in the use of automated warehouses. 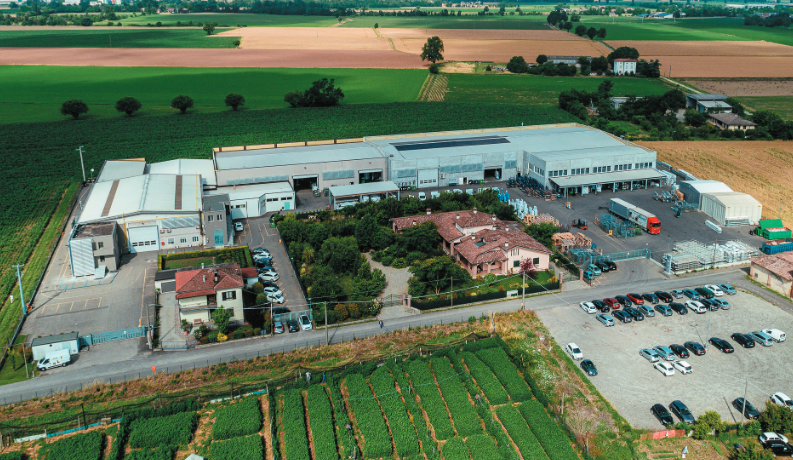 "Ours is a family story, cultivated year after year, with care, dedication, and respect.

One hundred years ago, from the idea of my grandfather, our company was born. The ownership has passed from father to son; it has been like this for three generations.

As a child, I saw my father like his father before him, committing himself with passion and dedication to the company. I owe them the tenacity, the spirit, and the desire for change that has accompanied me over the years and has allowed us to achieve great goals leading the company to become a proud spokesperson for made-in Italy quality in the world. The future is everything to discover, future made of sustainability, innovation, care, respect and progress, and the past remains to preserve."

The basis of fundamental values on which the company derive directly from the CEO's inspiration are:

- Eco-sustainability: from the awareness that sustainability is a tool for growth and development comes to the commitment to design and build durable windows with exceptional thermal insulation properties, which in addition to reducing the energy needs of houses and buildings, limit the amount of CO2 for climate and environment;

- professionalism and punctuality: to ensure the integrity of our windows, we use an effective packing system with protective films designed to safeguard the goods transported, which also allow the customer to arrange storage easily;

Over the years, the company has increased its investments exponentially, especially those aimed at supporting innovation development. This innovative policy implemented has touched some different areas, focusing on some of them.

First of all, the company uses renewable energy. In the company, we find sunshades designed and manufactured according to the indications of the company that allow you to keep the interior cold by minimizing the consumption of air conditioning, arranged along the entire perimeter of the establishment, from the office to the workshop, from the meeting room to the reception. They represent the link between the green choice adopted by Fossati and the care for corporate welfare.

Another important innovation in the electric field is the photovoltaic panels that the company has installed on the roof.

The usefulness of this innovation lies in the fact that the company will no longer have to bear additional costs for heating and cooling systems. Moreover, as is well known, obtaining energy from solar panels is a choice oriented towards eco-sustainability. It can, therefore, be that this choice is the junction point between profit and "green."

"Fossati Serramenti," as we can see, has a very ethical objective, to be greener and more sustainable. The company determines to cut the emission of Co2 and use the only electric forklift to move the goods in the factory. It was a huge investment to change all the forklifts from working diesel motors to electric. But CEO Giovanni Fossati has very much respect for the environment and people who work inside. "If you use only electric, there is no pollution inside the sheds, and it is also better for the employees: they work better, and there are no health problems."

This centralization process of the environment and workers has brought improvements from several points of view: the wellbeing of workers in the workplace, new hires, economic and social progress, expansion of "product portfolio" to meet the needs of all types of consumers.

One of the first things you notice inside the company is that, even when the temperature is high outside, the interiors are at pleasant temperatures despite the different openings that allow forklifts to enter and exit regularly. This maintenance of temperature is possible, thanks to the installation of sunshades, large windows placed along all the perimeter walls; it was the company itself that has designed and built these (tools) that allow you to reduce the internal temperature by at least 5 degrees. These represent “the link between green and welfare” in the sense that, in addition, to create more comfort from the internal temperature point of view and preventing sunlight from dazzling workers, the sunshades allow to reduce significantly the consumption and pollution associated with the use of air conditioning in the most offices.

This company aims to prevent layoffs in order not to damage the condition of workers. Over time with increasingly better technology, the products launched on the market are consequently better. So it is the market itself that rewards the company. The fact that production is constantly increasing allows an extension in the product portfolio of the company. This increase assists in hiring new staff continuously and consents to an evolution from the task view. This increase makes this job more interesting for the youngers without neglecting the economic aspect.

With time, the company’s management has increased overtime pay by up to 25% more during the weekdays, 50% on Saturdays, plus the best–performing employees receive gas vouchers every month. It is, therefore, said that the company puts in place a focus on the worker and considers the contribution that he brings to the working life of the same fundamental.

The environment is the system in which we live and operate. Additionally, for this reason, having brought benefits from a social point of view, such as improving the living condition of employees and their social/economic balance, the company has also invested in the environment.

Fossati is very vigilant to the cycle of each element. He tends to look after the end of life of each. For this reason, he takes care in a precise way of waste disposal. Fossati presents a minimum percentage of mixed waste, as the majority of waste elements are differentiated. Some special waste packagings, hard to dispose of on national soil, get sent to highly specialized german disposal companies. Even the plastic cup of the coffee machine gets differentiated. This differentiation is an innovative procedure that we can read of in Fossati Serramenti’s interview when the reporter remained amazed by this equipment aside from the coffee machine, and he asked the reason.

Another important theme is the plastic one. The plastic theme is relevant to us as we believe it is significant to recycle this material correctly. For this reason, we have included some Tritech machines. Machines placed near the coffee machines have the purpose of washing and shredding glasses and bottles. In this way, it becomes easier to recycle.

Fossati is a company that looks to a future made of zero emissions, but the present already definitely smells of that future. For their future, it is relevant to announce the construction of a new factory that is already under construction. The facility under construction will house both the production of Aluminum and Wood-Aluminum and the new logistics. The design is to obtain the maximum energy yield.

Since 1920 we have been dealing with doors and windows, and we have grown, and today we are a reference point in the sector of the national territory.