A Purpose to Repurpose: The Wasps Trust

Wasps (Workshop & Artists Studio Provision Scotland) is an organization that provides affordable studios to support artists, arts organizations, and creative businesses. They currently house about 900 artists and 33 organizations at 19 buildings across Scotland.

Wasps is a self-sustaining organization of about 25 employees supporting the artists—the largest cultural community in Scotland—to help them find buildings where they would be able to work. It is quite unique in that sector because very few arts organizations are self-sustaining in the world. The organization is operating all around Scotland, from Glasgow to Inverness.

The company see itself as a social enterprise with three main responsibilities. Firstly, they are a landlord. The second one is the regeneration aspect, and the third responsibility is what they have called Arts Enterprise: supporting the artists to be more enterprising and to have a sustainable practice.

The organization, which has existed for more than 40 years now, is focusing on regeneration. Old buildings are taken and repurposed for their studios. The company started with a group of artists that were looking for studio space. After having found a building to work in, the building became available for sale and they thought that buying it would be a great opportunity to secure their future. It has then grown and grown, principally in the last 10 years. The company has delivered 30 million pounds' worth of regeneration projects and 10 physical buildings. They have also managed to make the organization self-sustaining with crowdfunding in the early days. That is how, with those loans, the new buildings became self-sustaining.

This innovation fit with the UN Sustainable Development Goals because it is their main identity to be self-sustaining. The repurposing of the old building is directly positively impacting Goal 9, "to think of innovative new ways to repurpose old material" (United Nations). Also, by giving those old buildings a second life for artists, it helps to fight against inequalities (Goal 10). Wasps also is managing to improve artists and Scottish general well-being (Goal 3) and encourage sustainable cities and communities (Goal 11). It helps for a better world because Wasps maintains identity at each location. Cultural identity in Scotland is different than cultural identity in England, and there is a different cultural identity in Ireland. 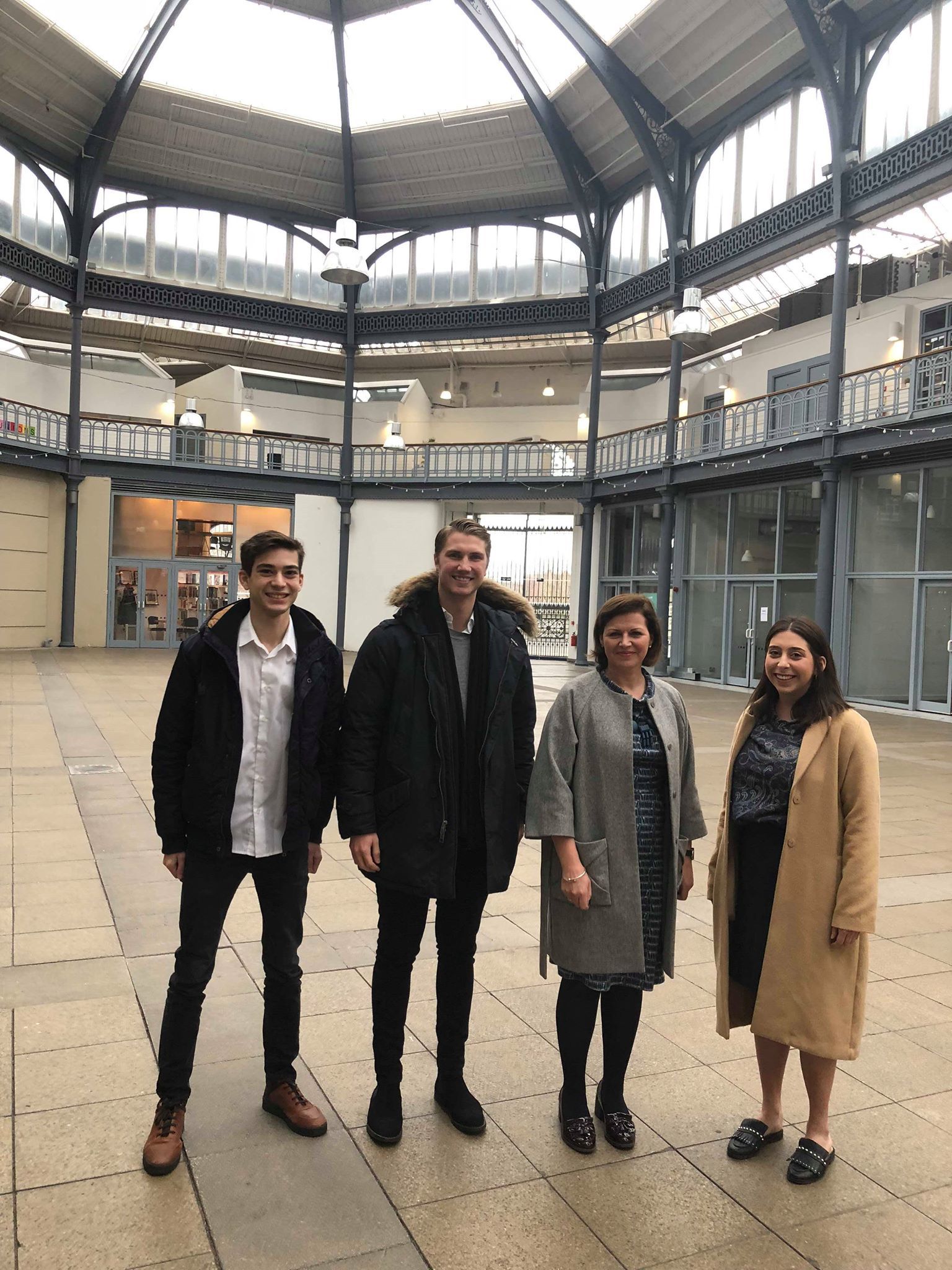 Wasps as an organization is inspired to help create sustainable communities through providing creative opportunities. Audrey Carlin from Wasps explained that her background is concerned with developing sustainable communities within the public sector. However, as a social enterprise, Wasps can be an effective actor in creating and inspiring social change through business. Such efforts can directly impact their contribution to the 11th SDG.

Wasps has identified the means by which they can support artists who do not have the adequate resources to pursue their career and progress within the industry. Wasps is dedicated to supporting a more sustainable environment for artists to thrive. They have established a large network of artists, who are able to connect more easily with others in the industry, providing a greater platform for artists to exhibit and showcase their work. Furthermore, they are making creative opportunities more accessible to others in the community through various programs. Accessibility such as this is necessary in reducing inequalities within society (UN).

Supporting the arts can produce wider economic benefits for communities. Audrey Carlin believes art can help tackle social issues such as mental health, as a means of bringing people together and improving people’s well-being. It is a process that requires a holistic approach, by communicating and engaging greatly with stakeholders in the community (Herremans et al., 2016). This can be recognized as a measure towards achieving the UN’s third SDG.

The regeneration of historic buildings is important in creating inspiring environments for artists to work in. Audrey Carlin believes it is important to maintain the cultural integrity of these buildings and that doing so is essential to what Wasps is trying to achieve:

The innovation strives to reduce inequalities by providing professional artists with affordable studio spaces. Environmentally, the regeneration of spaces is beneficial to reducing waste and improving the sustainability of communities by preserving historic architecture. Artists are able to promote the health of communities by hosting workshops and open expeditions regularly. Artist studios are a space for work and to bring communities together, thus contributing to the self-sustaining success Wasps Trusts has today.

Being self-sustaining has helped Wasps to develop solid economic growth. The turnover was approximately £1.9 million in the financial year that has just passed. Around £50,000 pounds is reinvested in arts enterprise, and there is also crowdfunding to supplement. The company is also putting away reserve for the next 25 years for the properties and putting money in the enterprise program. For example, they have taken 10 artists to Madrid and given them a chance to exhibit and sell. For lots of art organizations and social enterprise companies, commercial is not a word used and profit is not seen as a positive word, but that is essentially what Wasps managed to do: put profit into the company.

Most of the employees work in the Glasgow offices, but there is also a part in Inverness. They are selected by nomination or volunteer service. These employees get some discounts and checks for their weekly tasks. They have also—because of the scale of the network—contracted individuals who could not have been normally, thanks to partnerships. Thanks to the company’s sustainability approach, employees have advantages to encourage them in this behavior. They have a bike store, providing tools and equipment, pumps, a safe place, and nice a environment to put their bikes. At the "South Block Space," they can also have a yoga class at lunchtime (Carlin).

The finance team has two accountants. They have surveyors as well in the projects team, the project manager has a first-class degree in music, and the communications manager and reception staff have an interest in arts. Those employees have an interest in the arts, and that is an additional plus for the organization.

The Wasps Trust aims to benefit the society and the environment in a significantly innovative way. “We are at the moment a sort of social enterprise with three main responsibilities” (Carlin). Firstly, the organization began by identifying that there is a significant need for studios, as artists do not have the resources to continue their practices without additional support. The Wasps Trust recognized this need and established their organization around supporting these struggling artists. According to Carlin, the chief executive officer, The Wasps Trust “is recognized as supporting the largest community in Scotland” (Carlin) through their extensive geographic reach and availability of buildings where museums, galleries, and exhibitions have been held. For this reason, the organization feels that they have a responsibility to be self-sustaining, as there is a community relying on their varying services. The Wasps Trust has already had a significant impact on the cultural community of struggling artists and plans on continuing to do so as their contributions will ensure that “you can work and live as an artist in Scotland and it’s affordable to do so” (Carlin). After regenerating a building, the organization becomes a landlord and rents out the studios to artists at a fairer price than they would regularly pay. Currently, the organization has around 900 tenants across Scotland.

Furthermore, Carlin believes that the mission or purpose of the organization contributes to a larger meaning as the business model contains both an economic and environmental benefit. The Wasps Trust's second responsibility involves the repurposing and regenerating of old buildings that would have been derelict. This brings a new economy and new tenants to the area, thus sustaining the economy. Currently, the organization has 19 regenerated buildings; only two of them were built in the 1900s and the others are significantly older. For example, Audrey spoke about a regeneration project the organization had carried out 10 years prior to the interview which resulted in the area becoming occupied by complementary business, cafes, and trendy shops. Additionally, as the organization has a focus on regenerating old buildings, they do contribute to the environment as well. The organization puts energy-efficient measures into every building they regenerate and has a team of 10 employees (the green team) who examines all aspects of their energy usage. This is done in the office as well as the art studios. The organization encourages the artist to be sustainable in every way possible. This ranges from keeping the window closed when the heat is on to investing in and providing bike storage, as many of their artists cycle. The organization's third responsibility is what they call “Arts Enterprise” (Carlin) and involves supporting their artists to be more enterprising and to have a sustainable practice.

Wasps (Workshop & Artists Studio Provision Scotland) is an organization that provides affordable studios to support artists, arts organizations, and creative businesses. They currently house about 900 artists and 33 organizations at 19 buildings across Scotland.