A New Meaning to Clean Eating

Newport Restaurant Group has implemented a three step initiative including recycling oil, recycling oyster shells, and composting. Through these processes they create a more sustainable community and environment, while contributing towards the UN’s Global Goals, truly giving a new meaning to clean eating.

Newport Restaurant Group is a collection of fourteen restaurants, worth $80 million, that employs over 1,400 people and prides itself on working with local farms in order to support the community. Their passion for community and environment is their main motivation for continuing to take on new initiatives that create sustainability for their employee owned and operated company. While the restaurant group has been using local ingredients from nearby farms for a long time, leaders within the company recognized the mass amounts of waste produced by their restaurants and wanted to find ways to lessen the negative impacts of their processes on the surrounding communities. 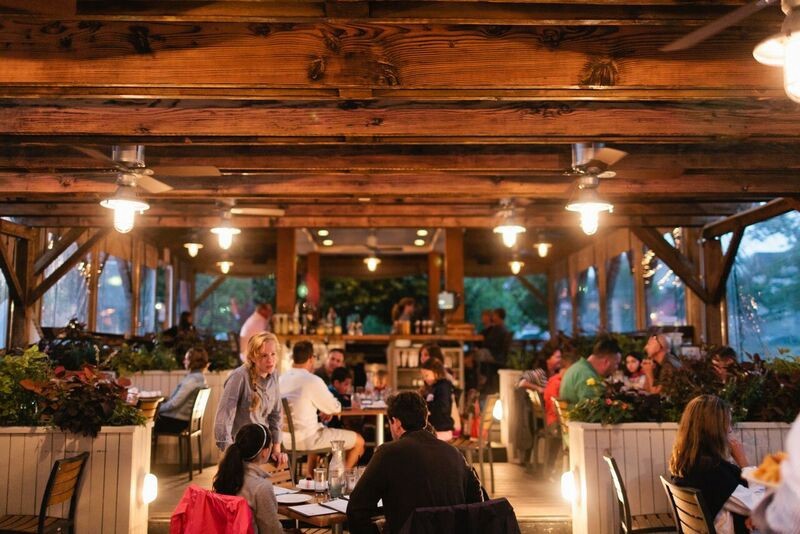 When speaking with the CFO Michael Lamond, he explained that there are four core values the restaurant group follows in everyday operation. “They are: Do The Right Thing, Employees Rule, Profits Matter, and Guests Guide Us.” These four principles help guide all the decisions that the company makes, and shows why they have initiated the innovative processes described above.

Director of Culinary Arts, Kevin DiLibero was the leader of these initiatives as he saw that they would benefit the company and coincide with the values of employee owners. “I really pushed that forward company wide with our chefs,” he said. “Its something I believe in, knowing that it's amazing how fast food scraps accumulate.” Therefore it is important to him that he “[knows] that they are actually going to a place that is going to benefit [them] long term.”

He went on to explain that since their employees can gain ownership in a share of the restaurant group, they feel more compelled to share the values with their guests. According to DiLibero, “our employees are aware that we are doing these things for the environment and through being an employee owner of the company… [the employees] discuss our values with our guests.” Employees share these initiatives so that the customers can see in action that the company is not all talk, but that they are actually acting on their mission and values in order to take large steps towards more sustainability within their restaurants. Although not all of their locations have the space or capacity to participate in all of these initiatives, DiLibero continues to work with each restaurant and their partners to explore new ways of implementing sustainability into their locations. DiLibero also explained that Newport Restaurant Group practices sustainability because they always want to follow their values. “For me it’s just about doing the right thing. For, again, our community and the environment,” remarked DiLibero. He went on to say how composting and recycling benefits both the community and environment by providing new recycled products instead of just creating more waste. This in turn benefits the company in the long run because it reduces their carbon footprint and allows them to uphold their core value of “Do the Right Thing.”

In completing these sustainability initiatives, they are also keeping in mind their values of: Profits Matter and Guests are the Guide. Because, when they support the community, contribute to a healthier and cleaner environment, and help support ocean life, customers want to support the restaurants and enjoy eating at a place where they know they can contribute to making a difference in the world.

Recycling oil, recycling oyster shells, and composting all have long term and short term effects on the environment. Through the composting and oil initiatives, Newport Restaurant Group is lessening its carbon footprint, leading to fewer greenhouse gases being released into the atmosphere. DiLibero states that “it's back to the environment. We’re helping the carbon footprint, in the sense of diverting waste and putting it back into a product.” In addition, diverting waste in different forms such as composting and recycling helps lessen the impact that can be large for an industry that produces so much excess food, oil, and other wastes.

In addition to having social and environmental impacts, the three step initiative benefits Newport Restaurant Group economically as well. For instance, recycling frying oil actually lowers the cost of clean-up for the restaurants, as they have significantly less instances of clogged drains and sewage backups; thus, they do not have to hire contractors to fix their piping, saving them quite a bit of money each year. Overhead costs on maintenance and removal of waste are greatly eliminated by recycling initiatives, leading many other restaurants to follow Newport Restaurant Group’s lead.

Moreover, composting replenishes soil, which also leads to less reliance on chemical fertilizers. In fact, composting adds nutrients and fosters the growth of beneficial microorganisms, thus increasing the chance of plant success. Due to this productivity, farmers do not need fertilizers with nitrogen, potassium, and phosphorus that can runoff into local water supplies, causing issues like algae bloom. Since Newport Restaurant Group sources the majority of their ingredients from local farms, they are only continuing to contribute to the success and profitability of their own restaurants as well as building up the farming economy around them.

Finally, recycling oyster shells yields high financial rewards. Oysters shells are extremely thick and heavy, therefore costing a significant amount to be taken away by waste disposal companies. By recycling the shells instead of paying for their removal, Newport Restaurant Group aids local biodiversity and replenishes the oyster population, while also avoiding heavy fines from waste management plants. Overall, not only does the company save money by recycling and composting, but they also lower their own costs of operation, keeping them cooking for years to come.

Newport Restaurant Group does not simply make and serve food, but ensures it will be available for generations through meaningful recycling. This choice has multifold effects not only for the environment, but the surrounding economy as well. DiLibero describes Newport Restaurant Group’s use of recycling oil and composting as “turning a waste into another reusable product… so it's really just diverting the waste and making sure it is turned into something else to provide a better product.”

For example, many restaurants choose to dispose of frying oil through the kitchen drain, which often times leads to blockage, sewage backup, and run-off into the ocean. On the contrary, Newport Restaurant Group has chosen to recycle their used frying oil through a nonprofit organization, which greatly builds upon the UN goal of “Responsible Consumption and Production.” DiLibero explains the process of recycling oil as “making sure that [the oil] is going into another re-stream that turns it back into another product, a recycled product.” One way recycling frying oil upholds sustainability is the new capability to convert it into biodiesel. In the last two years, Newport Restaurant Group’s locations recycled a total of 53,379 gallons of frying oil, creating 39,233.5 gallons of biodiesel. This fuel can be used to power machines, cars, homes, and is a much cleaner resource than typical gas. Biodiesel has a lower impact on greenhouse gases, as well as burns with less pollution in combustion engines. Finally, recycling frying oil can actually increase local jobs, as the process is still in its infancy stages. As this method begins to increase in popularity, new jobs will arise such as information technology, engineering, sales, marketing, accounting, collection, and training.

Of additional interest, Newport Restaurant Group has also taken on a composting initiative, which lowers trash sent to landfills, feeds soil, and minimizes chemical runoff, thus affecting life on land. The restaurant group prides themselves on using fresh and local ingredients, as DiLibero feels that they are “tying it back into the community [and] strengthening our farms by having better soil and feeding our food.” By preventing chemical damage and drainage in landfills, Newport Restaurant Group helps sustain land biodiversity, thus contributing to the UN’s larger impact goal of “Life on Land.” Through the addition of composting within their business, Newport Restaurant Group has kept tons of vegetable matter out of landfills (parts of food not safe for human consumption). Not only does this help prevent landfill overflow, but it also minimizes the pollution of organic breakdown in them. Layers of trash in landfill prevent oxygen depletion of organic trash, causing it to deposit methane gas as it decays, rather than carbon dioxide. By choosing to compost, Newport Restaurant Group has significantly minimized landfills' contribution to climate change.

Finally, Newport Restaurant Group has taken part in oyster-shell recycling programs, rebuilding much of the habitats in the Narragansett Bay area, associating it with the UN’s goal of “Life Below Water.” Through recycling used shells, nonprofit groups are able to help restore the oyster reefs and rebuild populations, which have been diminished by overfishing and high water acidity. In this process, Newport Restaurant Group donated their old shells to a nonprofit that returns them to the oceans as man-made reefs and homes for baby oysters, as well as other small game fish.

Overall, these initiatives put in place by the Newport Restaurant Group are all in hopes to create a more sustainable community and environment, while contributing towards the UN’s Global Goals, truly giving a new meaning to clean eating.

A collection of unique employee owned and operated restaurants located in and around Providence, Rhode Island. Newport Restaurant Group participates in several initiatives to maintain social and environmental sustainability.