TTS contains multi-layer patches that consist of a backing layer, drug containing matrix, rate controlling membrane, adhesive matrix, and a release liner. The active drug is absorbed through the skin and enters directly into the bloodstream where it is distributed to the rest of the body.

Lohmann Therapy Systems collaborates with pharmaceutical companies to develop pain-free, trans-dermal systems for medications. They have been a successful substitute for patients of all ages who cannot take, or are uncomfortable with receiving other forms of medication delivery. The trans-dermal method provides a convenient alternative for patients who have trouble swallowing pills or receiving injections.

LTS is the world’s leading provider of trans-dermal solutions processing 13 active substances. Experts have concluded that there are at least 30 more active substances that could potentially be applied through the skin using a TTS. Lohmann is constantly focused on furthering research and testing new medications that could be used transdermally. 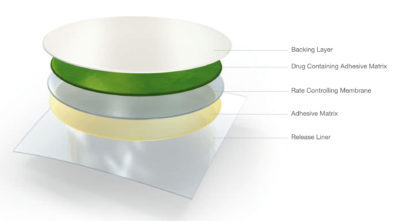 “It all started with the vision of a trans-dermal patch, and has developed into a success story that has lasted to this day.” - ( LTS website )

In 1980, Lohmann was a small company in Neuwied, Germany. They had a specialist who worked with technical adhesive tapes who developed the idea of trans-dermal systems that would be able to deliver medication through the skin painlessly as an alternative to other forms of receiving medication. They saw the need for an alternative to injections and or pills that would be comfortable for a patient and could easily be applied.

In 1984, after four years of research and development, the first trans-dermal matrix system from Lohmann Therapy Systems was approved and introduced to the market. This first patch was a nitroglycerin patch used to prevent chest pain due to coronary artery disease.

Each year, LTS improved its products and developed new ones that continue to be used today. In the 1990s, the company incorporated new medications that could be used in their patches, including the first-ever nicotine patch for smoking cessation. The nicotine patch, by far, has been the most widely used product of Lohmann Therapy Systems. Today, Lohmann has partnered with over 20 pharmaceutical companies to produce trans-dermal patches for various drugs.

Lohmann’s vision has always been to help people. During our interview with Information Technology Manager, Michael Santomieri, when asked about what inspires him about the company, he replied “LTS manufactures Alzheimer’s patches, Parkinson’s patches, heart disease patches, and smoking cessation patches. The patches that are being made by LTS are important to me personally because my family members deal with a number of these illnesses. Therefore these products have touched me and my family personally.”

Lohmann Therapy Systems has impacted lives globally. It aligns with the UN Sustainable Goal which ensures healthy lives and promotes well-being for all ages. It is also focused on supporting research and development of medicines as well as providing affordable medicines for all.

Lohmann Therapy Systems is very successful not only in Germany, but globally. As of 2018, LTS has more than 300 patent families. The US, Japan, and Germany are their largest markets. They also have markets in the UK, Spain, and Italy. Their successful innovations have not only allowed them to help people from all over the world, but have generated enough profit to allow them to further research into new groundbreaking drug delivery systems. In 2018 alone, LTS produced over 840 million systems and had 336 million in revenue.

Lohmann has raised enough revenue through the success of its trans-dermal patches and oral-thin films to invest in the study and development of pain-free injection using micro-needles. LTS is currently researching a variety of micro-needles all made from different materials with the hope of being able to inject medications with large molecular makeups into the skin.

Lohmann Therapy Systems has impacted the lives of people from all over the world through the use of their drug delivery systems. These systems have brought comfort to people struggling with addictions, illnesses, and mental illness. Lohmann has a saying, “Our patients’ well-being drives LTS.” Their focus is on the health and well-being of people from all around the world.

In our interview with Michael Santomieri, he stated, “The core values or objectives of LTS and the products that we make all focus on contributing to the betterment or well-being of patients with specific illnesses that all relate to items that are needed throughout society. We provide for recovering addicts, heart diseased patients, and people that are trying to stop smoking. From my perspective the primary focus of our organization’s products is to help fulfill a societal need.”

Michael Santomieri, IT Manager, Head of IT department 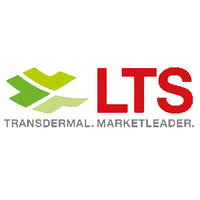 Lohmann Therapy Systems (LTS) partners with pharmaceutical companies to provide drug delivery systems as an alternative to injections and pills. Their main product is an adhesive called Transdermal Therapeutic System which disperses drugs through the skin. LTS is creating new ways to administer medication to patients around the world.