"La Clarita" is a micro-enterprise made possible through a partnership between the City of Guaminí, local producers, an educational institution and a public hospital. Its mission is to promote the agroecological practices in the area, creating a change for previous productive practices and changing the way people understand the soil, Nature, and life.

By supporting family agroecological farming, "La Clarita" has achieved fair trade practices, which allows consumers to obtain healthy foods at an affordable price and producers to get paid a fair price, without intermediaries.

These practices are not common in Argentina, since most of the agricultural production is done by large companies with transgenic seeds, and commercialization is concentrated in a reduced number of players.

The innovation at "La Clarita" is an unprecedented experience, since it was the Municipality that began promoting a policy at local level that goes against the regional and national Corporate and Public Policies. The Municipality gathered, promoted and supported an initial group of producers to make the transition to agroecological practices and fair trade.

The Ex-Director of the Environmental and Water Resources Secretary and "La Clarita" leader, Marcelo Schwerdt, began his efforts by forming a group of agroecological producers in the Guaminí region, guaranteeing the necessary professional support to carry out the changes needed for the transition. For this, the agronomist Eduardo Cerdá, a worldwide known expert in agroecological production, was hired as a consultant.

The development of a public open debate space with the participation of specialists from different disciplines was agreed, in order to protect the health of the population and the integrity of the region's natural resources. These "open-gate talks", offered by the experts to the producers, helped as a way of companion and to guide them in the gradual change towards agroecology. This space was, and continues to be, the place where knowledge is shared, fears are dispelled and myths are demolished, and is empowering new players to migrate into a sustainable production and consumption model.

Several milestones have been achieved:

This innovation resulted in an increase of farming yields, reduced costs (calculated at 56%) and increased margins by 120%. Producers sell their entire harvest to the Mill, ensuring the sale at a fair price.

The Municipality of Guaminí officiates as an inspiring model for other territories. Not only for having migrated to agroecology, but also for having acquired its own Mill. It is possible to support the formation of positive economical, social and environmental impacts between the different urban, peri-urban and rural areas, by strengthening a disruptional regional development plan.

"La Clarita" is a clear contributor to the following SDGs:

The town of Guaminí is a clear example of how alliances can be promoted between the public sphere (Municipality) and the private-public sphere. In this project a whole community is involved for the greater good and a flourishing business community.

The practices carried out by the students of the Special School in the Mill "La Clarita", promote the creation of inclusive local employment and prevents migration of the younger propulation to other cities. “The purpose of including internships within La Clarita was to give the possibility to the students to learn a job and have eventually an employment opportunity,” as stated by Marcelo Schewrdt project coordinator, former Director of Environment and Water Resources, and current Director of the Agrarian School No. 30 of Guaminí.

The artisanal flour mill and its product "La Clarita", is an agroproduct with an impact on the community's health, by reducing fumigation with hazardous chemicals that pollute the air, water and soil.

“Guaminí was one of the first Municipalities to convert to agroecology and be a reference when having its own mill, so that flour is not mixed with contaminated grains of toxic fumigated fields of dubious origin,” shares Claudia Elorza, Secretary of Environment of the Municipality of Guaminí.

Guaminí directly impacts on climate change, thanks to a solution that takes care of the soil and prevents the deterioration produced by the traditional technique of cultivation with agrochemicals: agroecology. This practice results in soil recovery, improving CO2 capture and biodiversity regeneration.

The quantity produced at "La Clarita" is by request only. This reduces unnecessary stock and waste. Its consumption is used in bakeries and individuals from the city of Guaminí and neighboring towns. The purchase of grains for flour manufacturing is from local producers. The price paid is under fair trade parameters for producers according to local cereal market prices. The producers also donate wheat grains to the Mill, in order to contribute to the benefit of the Cooperator of the Joaquín Llambías Hospital and the School of Special Education No. 502.

With the conversion of Guaminí into agroecology soils, ecosystems are recovered and the loss of local biodiversity is slowed down. 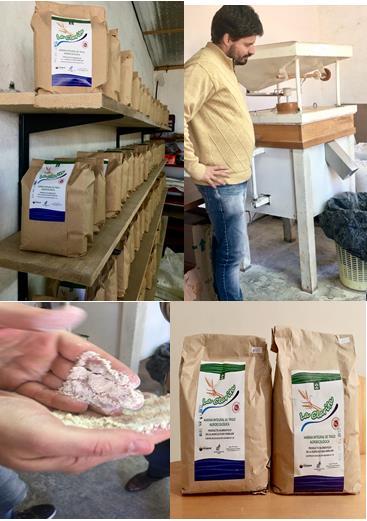 The project began with Marcelo Schwerdt, former Director of the Environmental and Water Resources Secretary of Guaminí. He started to notice a direct correlation between health problems in the municipality and the fumigation practices in the fields. Marcelo, in desperation, sought for answers, and with the help of experts like Cerdá, he found a solution to change the fumigation paradigm: the agroecology alternative. When he found this alternative, he "started telling our farmers to try to leave as soon as possible the application of agrochemicals, because they were making all of us sick, especially our children, and we are also damaging the environment. That there was hope and an alternative”. So a group of eight to ten farmers decided to sign in.

Then he decided to refurbish the Mill to have a commercial outlet for the farmers who joined the proposal.

Marcelo confirms that “now, five years later, we demolished the myth that we cannot produce without agrochemicals, and we can demonstrate that we can produce at the same level, with less costs”. Furthermore, "we have a competitive advantage, since more people are demanding agrochemical free food and the community of Guaminí is already there".

In Argentinean rural areas, many families dedicated to farming had losts their lands with the arrival of the Green Revolution, which is based on extensive and monoculture agriculture, with the required purchase of the "technological package".

Agroecology succeeded in reinserting families back into the countryside, returning to the traditional agricultural production system under which the Natural resources are protected and families work together.

A cooperative model as "La Clarita", where the community joined together for the greater good with agroecological practices and fair trade policies, can be a sustainable development model option in local areas for reshaping those communities having a triple impact: in the economy, in the environment and in society.

"La Clarita" is an innovative business model that, through a Private-Public Partnership, favors all of its members. Based on fair policies and with the main focus on society, the community health is improved, the environment is protected and economic benefits are achieved.

In the social aspect, not only more employment has been created and small businesses are flourishing, but also, half of the profits obtained from the sale of the flour are destined to two public welfare institutions: the Pro Aid Association of the Joaquín Llambías Hospital and the Special Education School No. 502, whose students suffering from different disabilities make their internships within the project.

In the economic aspect, "La Clarita" flour is sold in local markets and cultural venues dedicated to the commercialization of agroecological products, promoting a direct link between producers and consumers, as well as the production of short chains, which guarantees the sale of the product at an affordable and fair price.

With the local Ordinance for the Promotion of Agroecology, a system of “Participatory Certification” for the production was constituted, which guarantees, through the validation of multiple actors (farmers, professionals, Municipality, Chamber of Commerce, Bromatology and consumers) a healthy and high quality product, with a seal that is an alternative to the conventional system of quality certification.

The adoption of rotational agriculture practices and livestock farming, guarantees placing value on the environment and the community's well-being.

Claudia Elorza, Director of the Secretary of Health of the City of Guaminí 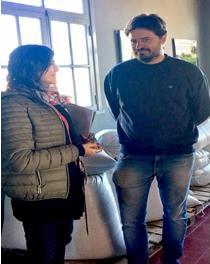 The entrepreneurship is located in the City of Guaminí, Province of Buenos Aires, Argentina.