Soria Moria Boutique Hotel has been operating in Siem Reap, Cambodia since 2007 with the purpose of helping local people and the community. It is a for profit business but at the same time their policy implies providing support to local institutions and cooperation with organizations for the benefit of the area. Moreover, the entire staff of the hotel comes from the local community, which is sent to school and trained before joining the working force.

At the moment, the Cambodian government is trying to build new schools and increase salaries, but all the education and the economic systems are leaking and Cambodia is still a developing country. People are poor, only 8% of the entire population goes to school; ten years ago, no one was giving importance to education. Ken and Kristin decided to open the hotel with a specific purpose: hire local people, send them to school, let them move up the career ladder and become owners of the same hotel. The process of hiring is different according to the positions required: for front staff and kitchen, people are selected and then sent to school in order to acquire certain skills regarding communication, English language, IT knowledge; for housekeeping jobs, first selections are made from poor people who are later trained on how to clean, tidy rooms and behave. Soria Moria is one of the first ideas for a sustainable hotel that can help the locals in very simple ways; it is also the first Cambodian hotel to be free of requiring a deposit. The whole staff comes from the local communities, they are trained and helped to manage the hotel: as a matter of fact, employers bought hotel stock and now own 51% of the shares, so they are practically the owners of the hotel itself. 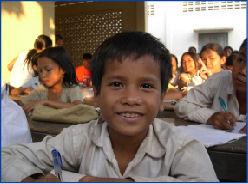 Sokha is learning a lot while working, both about herself and about her own country. She got married but unfortunately her marriage did not work and she got divorced. When she finishes working, she goes home and takes care of her younger brother, her “little boy”, of her father who is blind and unemployed, and of her mother, unemployed as well. She receives a $300 USD salary per month, she pays for sending her son and her brother to school, she pays for food and electricity and there is not much left after all these expenses. Sokha is a true example of how individuals can improve their living conditions, starting from personal motivation and willing to learn and work. Ken Oishi and Kristin Holdø Hansen were looking for these results when they first opened Soria Moria in 2007; they needed people to believe in equal human rights and a better world. Sokha wishes that in ten years time, her province and her country will improve in education, lifestyle, values and expectations.

Soria Moria has taken on several projects and exchange programs during the years, in order to benefit the local people. They are first hospitality business, they are profitable and they want guests to enjoy their stay, feel at home and leave the hotel with sadness while thinking about missing the entire staff. At the same time, their program is revolutionary, the first one of its kind in Cambodia: the name is Soria Moria Educational Development Program (SMEDP). The majority of the locals involved come from farmer families living below the poverty line, born with little opportunities to move forward in life. Gender equality is fundamental in the hotels organization and females hold more than half of the managerial and supervisor positions. Nowadays, nine members of the staff are studying bachelor degrees and three members a master degree. Moreover, for Soria Moria employees there is a possibility for an exchange program with Quality Hotel Expo in Fornebu, Norway: the program is named “Cambodia-Norway Exchange for Sustainable Tourism”, and lasts three years. Each year, two employees from Soria Moria spend twelve months working in Norway, and two employees from Quality Hotel Expo spend the same amount of time working in Cambodia.

As far as the local communities and the environment is concerned, Soria Moria collaborates with organizations and institutions to provide better services for poor people. The first organization they deal with is NEDO (Norwegian Educational Development Organization), a non-profit and low cost company aiming to direct educational aid and sustainable development to third world countries at a minimum cost. They promote a number of projects at Soria Moria, among which the most interesting ones are: “The white bicycle project” offer guests the possibility to rent a bicycle for $2 USD a day, thus contributing with providing water filters and clean drinking water to selected schools in the rural areas of Siem Reap province; “The love card project”: guests can buy and send home cards in order to contribute subsidizing teachers’ salaries and maintaining school buildings. The children receive art classes where they paint the postcards that are sold to tourists. The most remarkable institution that works with Soria Moria is the Angkor Hospital for Children: the hotel takes the cooking oil from the kitchen every day, keeps it in containers and gives it to the hospital to be used as biodiesel to run their generators.

Soria Moria is a small hotel with only thirty-eight rooms. It is a for profit business but at the same time its purpose is to impact the local community and facilitate long term economic development of the impoverished area of Siem Reap.

Soria Moria is deeply involved in the society: young people can learn about their country and culture. The first key concept raised by Sokha is education: the future of Cambodia is represented by educated young people. The hotel helps children with teaching them how to make and manage money, they will learn and improve their lives while learning from the employees. Another key concept is gender equality: females hold more than half of the managerial and supervisory positions, and Sokha’s dream is to help empowering the women in Cambodia. In her opinion, as soon as they get married, Cambodian women start believing they cannot do anything because they are dependent of their husbands. Sokha is willing to see a change in her society at this point. The most important environmental benefits are related to the reduced pollution, consequent to the use of white bicycles by the hotel guests; moreover, the recycled cooking oil that goes to Angkor Hospital for Children is environmental friendly, because machinery run with this initiative is less noisy and every part of it gets less dirty than they would if engines were functioning with petrol. Sokha admits that they also recycle paper, plastic and plastic bottles to avoid polluting the environment. At an international level, Soria Moria won some awards: in 2012, the World Responsible Tourism Awards, for being a hotel with a positive impact on the local supply chain and local people; in the same year, the Wild Asia Responsible Tourism Awards, for the commitment to supporting the local community and economy in which the business operates; in 2013, Condé Nast Traveler World Savers Award, that recognizes excellence in social and environmental responsibility. The hotel changes lives in its community and is a destination for sustainable, responsible and eco-friendly travel. 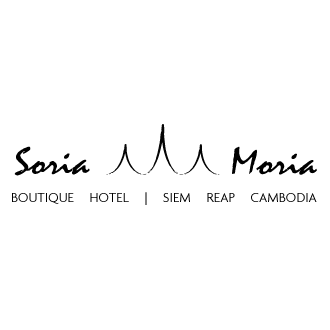 Siem Reap, KH
Business Website: http://thesoriamoria.com/
Year Founded: 2007
Number of Employees: 11 to 50
Cambodia is still one of the poorest and least developed countries in Asia. The locals do not have the same level of education as people from more developed countries do, many have never attended school, but they strive to do their best and are eager to learn and improve. That was the aim of Ken Oishi and Kristin Holdø Hansen, a Norwegian couple who opened Soria Moria Boutique Hotel in 2007. Ken was born in Oslo, made the project possible and is the financial investor and the sponsor of the company; Kristin was born in Sandefjord (Norway) and is the educator and the sustainability advisor at Soria Moria. Both of them have years of experience in the hospitality industry, as well as in business development, management and corporate finance. Ken is half Japanese and half Norwegian, so he has always had interest in Asian cultures and peoples: while establishing his company in Cambodia, he wanted to help the Siem Reap community believe in a better future. The case of Sokha Sam, the General Manager at Soria Moria, can be taken as a model for the ones who want to write a different story of their lives. Sokha is a Cambodian woman who comes from a very poor family: after she graduated in high school, she looked for a job and she applied to several positions. One day, she had an interview at 9 am in the morning, she made a good impression even if she could not speak English, and she was hired and ready to work at 12 pm the same day. She first worked as a dishwasher at Kristin’s first guesthouse; then, she was moved to the kitchen and later on promoted in the present front-office position at Soria Moria.