A Big Opportunity for the Employment Market

The innovation of Cafè Joyeux is to hire, train and employ people with cognitive disabilities such as Down syndrome or autism, in order to promote disability inclusion by offering work, in an ordinary environment, to people normally excluded or limited from the employment market.

What differentiates Cafè Joyeux from the other companies is its higher social conscience which leads it to integrate people with disabilities in its staff, offering a work that can give them economic indipendence and security.

In France, only 3.5% of workers have a sort of disability and a lot of them find works tank to the State aid. Cafè Joyeux instead hires the majority of its employees with cognitive disabilities and this is the strength of the company. This is a reversal of the general idea of every other company that puts profit at the first point.

Obviously, the employees of Cafè Joyeux are professionally trained by some experts in the sector, such as chefs and waitresses, and all the training is supervised by a special educator.

After the training the new employees are hired, and they start to work in a normal business with the aim of making profit. Workers can take on various role such as waitresses, chef, cashier or hostess and during their work day they are supervised by a manager that check that everything is done in the right way.

All of this is done to make employees feel they part of a real economic and productive reality that allows them to be appreciated and not only a burden for the society. 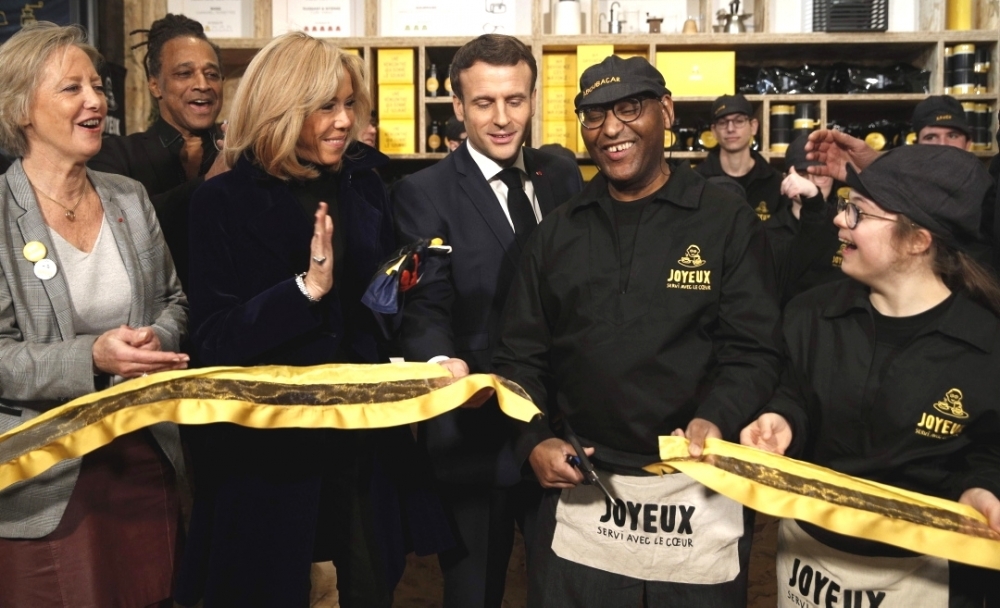 A Big Family Of Workers

The business idea of Cafè Joyeux was born thanks to a lucky encounter with an autistic person who, knowing the status of entrepreneur of Yann Bucaille Lanrezac, asked him for work, declaring that he wanted to be useful. After this event, the Bucaille couple developed Cafè Joyeux.

The main impact of this company is related with the social sector, indeed Cafè Joyeux with its activity aims to reduce the unemployment people with cognitive disabilities, integrating them in the society. This activity has been recognized many times by the French Government and many of its representatives such as the Secretary of Economical and Social Transaction and even the President of the French Republic Macron. All of this attests that this company have a good impact on society. At the moment the company has opened only five cafés and only in France but it’s still a growing entity.

Cafè Joyeux is also very attentive to its coffee supply, indeed it uses only coffee from selected farmland that have the fair trade certification and the packaging of this product are made in Paris by personnel with cognitive disabilities.

“We become strong when we accept our vulnerability.”

The workers of Cafè Joyeux are involved in the general service, hostess, cook, waiter, the cash desk and the kitchens, they hold various positions based on their skill sets. When the business idea was developed the purpose was to simply give work to people who do not have any and who, however, strongly desire it. According to a survey, in March 2020, the unemployment rate for people with disabilities is double that of others, in France there are 700.000 people affected by autism and 65.000 of them have Down syndrome, and a lot of them suffer unemployment than the rest of population. Cafè Joyeux is a profitable model with the aim to transform a difference into a strength and not into a weakness, employing all of these people in order to reduce the unemployment rate of potential workers affected by Down syndrome and other kind of disabilities. But is not so easy to became a “joyful crew member”; the potential employees are recruited and trained by a team of human resource and particular educators, after an initial assessment; at the end of their training the potential new workers are hired by Cafè Joyeux and start their career. The employees are always supervised by benevolent managers. The mission of the company is to put disability in the heart of cities and our lives.

“Work together with our weaknesses foster inclusion through encounters in a joyful environment, cook, serve and open our hearts”

Cafè Joyeux is a socially responsible company, currently located only in some major cities in France (Rennes, Paris, Bordeaux), which deals with catering.

The main objective of the company is to include more girls and boys with cognitive disabilities, such as down syndrome or autism, within the social and working fabric, making people more aware of these issues, and promoting the inclusion.

The company demonstrates the social impact by pursuing its goal every day; in fact, its staff is mainly composed of people with disabilities, without discriminating them for this, giving them a steady and well-paid job that can make them feel satisfied, that allows them to have greater visibility and allow the world to know them. All Cafè Joyeux restaurants are in busy streets of large French cities, very active and visited, and most of the job positions, especially those in contact with the public such as service, cooking and cash, are covered by boys and girls with disabilities.

Cafè Joyeux is the first socially responsible chain of bars/restaurants, founded in 2017 by Yann Bucaille-Lanrezac, in Rennes. The business aims to train and employ people with cognitive disabilities such as Down syndrome or autism, this is the mission of the company. The business is nicknamed a joyful organization; the corporate idea was developed by Yann and Lydwine Bucaille Lanrezac, husband and wife. The strength of this company is the promoting of disability inclusion, by offering work, in an ordinary environment, to people normally excluded or limited from the employment market.